This Memorial Day, a tradition returns in-person to Flanders Field American Cemetery in Belgium. It’s not a spectacular fly-over like Charles Lindberg’s in 1927 when he dropped red poppies from the “Spirit of St. Louis” over the gathering, but a century-old commemoration that is iconic among residents of nearby Waragem and all who come to honor the fallen World War I American soldiers buried there.

Whether in late May heat or downpour, local Dutch-speaking school children have been singing “The Star-Spangled Banner” at ceremonies since 1919—except during World War II—tackling the song’s challenging octaves acapella. Even during the recent pandemic, small groups continued to learn and perform the U.S. national anthem before virtual audiences.

This annual performance so authentically captures the bilateral relationship that it has earned the respect and affection of Embassy Brussels’s public affairs staff, who work hard to engage audiences in shared U.S.-Belgian history.

“It has grown naturally and spontaneously out of the local community,” said Cultural Affairs Supervisor Brian Dick, who noted Waragem’s current mayor participated in the event as a child.

This momentum has depended on generations of Waragem children, teachers, and supporters, and it will require efforts by many more to continue. After two decades of helping plan the ceremonies, Dick said, “The program doesn’t change, just the people do.”

The last live public performance by the children of Waregem was captured by Multimedia Specialist Serge Vandendriessche from Embassy Belgium’s public affairs staff on May 26, 2019. The event is scheduled to gather in-person again on Memorial Day 2022.

Traditionally, embassy and military officials individually thank the young performers following each annual performance, and before the solemn ceremony continues. Given the historical context—the ultimate sacrifice made by 368 American men during the last brutal weeks of the European war—the images from this event hold symbolic power.

“Many of the soldiers buried here were just kids themselves,” said Vandendriessche. “They enlisted because they believed freedom was worth fighting for.”

Each year, as poppies start to bloom, a new group of Waragem children will continue to sing in their honor. 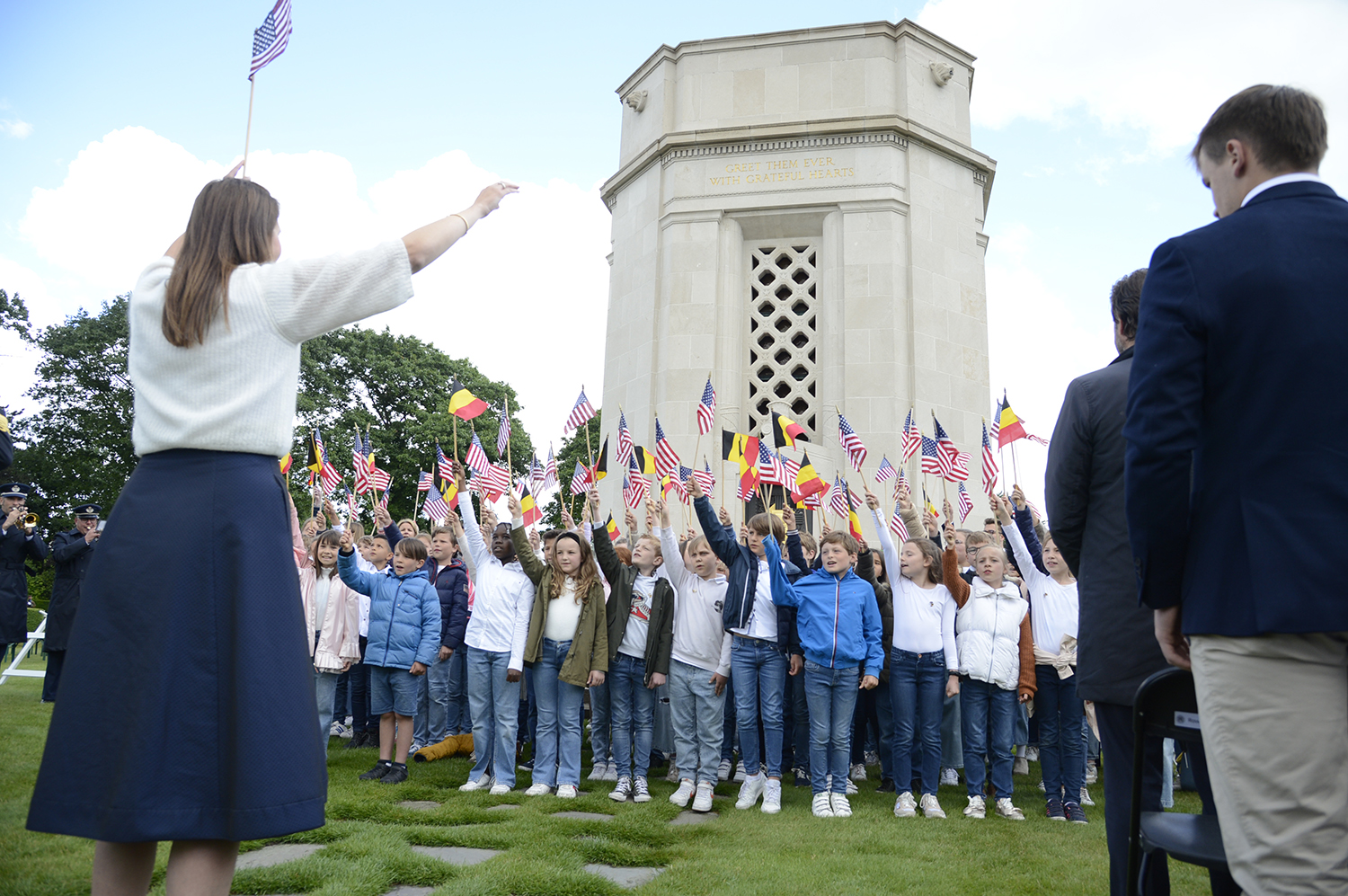 Local children sing the U.S. national anthem at Flanders Field American Cemetery in Waregem, Belgium, during the last in-person Memorial Day ceremony before it shifted online for two years during the pandemic, May 26, 2019. Photo by Serge Vandendriessche

Local children sing the U.S. national anthem at Flanders Field American Cemetery in Waregem, Belgium, during the last in-person Memorial Day ceremony before it shifted online for two years during the pandemic, May 26, 2019. Photo by Serge Vandendriessche