Home Startpagina | News & Events | What’s the INF Treaty? How is Russia breaching it? 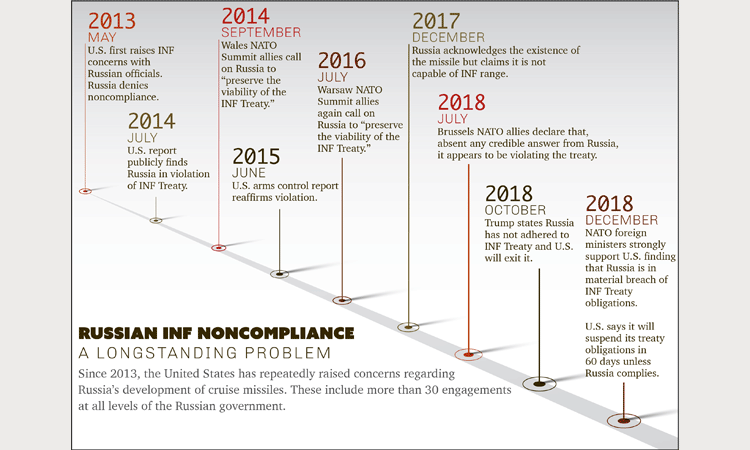 What’s the INF Treaty? How is Russia breaching it?

Thirty years ago the United States and the Soviet Union agreed to the Intermediate-Range Nuclear Forces Treaty (INF) to destroy nearly 3,000 intermediate-range and short-range missiles and follow a strict verification regime to ensure they never returned again.

However, the U.S. has been raising alarms since 2013 that the Russians have developed a new, mobile, ground-launched cruise missile that violates the treaty.

In December 2018, the U.S. formally declared Russia in material breach of the treaty and said the U.S. would suspend its obligations in 60 days unless Russia returned to full and verifiable compliance.

Secretary of State Mike Pompeo, speaking in Brussels after a meeting with NATO ministers, said, “Russia’s actions gravely undermine American national security and that of our allies and partners,” and they put in danger the lives of tens of thousands of American troops in Europe and the millions of Americans living and working “alongside many more millions of Europeans.”

The Russians for four years denied they had such a missile while the United States raised the issue more than 30 times with Russian counterparts at all levels of government.

In November 2017 the United States revealed the Russians’ name for the missile, the 9M729. Russian Deputy Foreign Minister Sergey Ryabkov acknowledged its existence but denied it was capable of being launched to hit targets between 500 and 5,500 kilometers away, the INF-forbidden range.

The ministers of the 29-nation alliance said they had raised these concerns bilaterally and multilaterally for five years, and Russia has responded only with “denials and obfuscation.”

“We call on Russia to return urgently to full and verifiable compliance,” the ministers said, making clear the responsibility for saving the treaty lies with Russia.

Pompeo expressed hope for improved relations between the U.S. and Russia, but added, “the burden falls on Russia to make the necessary changes. Only they can save this treaty.”

Our nations have a choice: bury our head in the sand or take commonsense action in response to Russia’s flagrant disregard of #INF. #Russia has violated since 2000’s, while U.S remained in scrupulous INF compliance. pic.twitter.com/C9bsL60sqB

A version of this article was previously published on December 14, 2018.