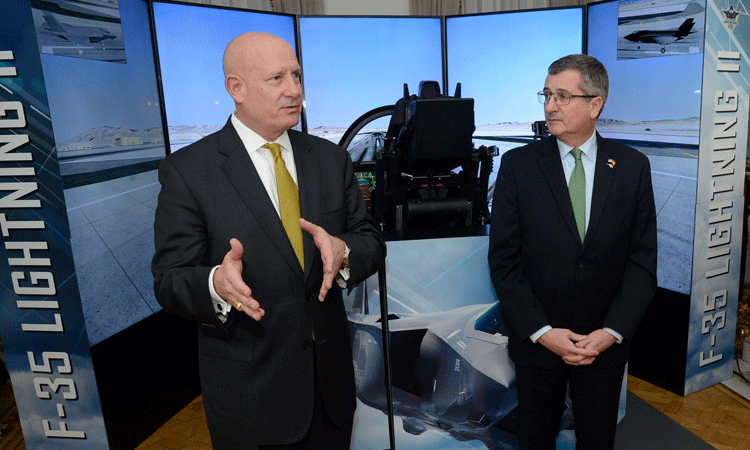 On January 31, the U.S. Embassy to Belgium organized a reception to bring together longtime allies and key partners in honor of four decades of air defense cooperation. The event highlighted the successes of the past and focused on the future as Belgium pursues its process to replace its current F16 fighter jet program. Lockheed Martin brought its touring F-35 Lightning II cockpit demonstrator to the official residence of the United States in Belgium, Whitlock Hall, for members of the press and guests to experience the capabilities of this unique 5th-generation aircraft. Among the distinguished speakers were Royal Netherlands Air Chief Lieutenant General Dennis Luyt, Royal Norwegian Air Force Chief Major General Tonje Skinnarland and Chargé d’Affaires, a.i., Matthew Lussenhop.

Lieutenant General Luyt remarked, “I think tonight is all about building the fifth generation coalition. As the Royal Netherlands Air Force, we are proud to be part of that as we grow that coalition.” He added, “If you are part of a fighter fleet of almost 3,000 aircraft, it is a big
difference compared to being part of a fleet of a couple hundred aircraft. The advantages that we have seen, not only in operations, but in training, not just pilots, but maintainers, mission support personnel who are working on the same platform, being able to literally fly each other’s aircraft in training, working closely together in operations seamlessly, all this is the benchmark of doing business together in the future as an effective coalition.”

Major General Skinnarland said, “One of the main reasons behind the F-16’s success has been the international cooperation, as the work of the European participating air forces in close cooperation with the U.S. Air Force and Lockheed Martin has given Norway the ability to
continuously safeguard NATO in the north for almost 40 years.” She added, “Changes in our security environment have reminded us that we can’t take security for granted. I have strong expectations for continued close cooperation with allied nations, partners and industry, since our fellow air forces’ integration and interoperability across domains will be even more important in the years to come and will be crucial to the success of our air forces in the future.”

“The Belgian Air Component ranks among the best in the world, flying the F-16 for more than four decades, and playing a key role in operations throughout the Cold War and beyond – most recently in the successful campaign to defeat the Islamic State and in the Baltic Air Policing mission,” Chargé Lussenhop said. “As the F-16 nears its retirement, Belgium has created a rigorous and fair process to choose a successor. We understand that a massive defense outlay is a difficult choice for any country, and it is important to justify such an expense while protecting essential security interests – the need to maintain defense expertise and a robust high-tech industry within its borders. U.S. industry is providing very substantial opportunities to Belgium as part of the U.S. offer, and we expect other science and technology partnerships to evolve.”

The United States, Belgium, Norway, and The Netherlands are longtime allies and all signatories of the 1975 Multi-National Fighter Program, which has led to more than four decades of air defense cooperation and capability with the F-16 Fighting Falcon. Belgium’s pledge at Wales, combined with its publication and pursuit of the Strategic Vision for Defense 2030 objectives, has reinvigorated its defense sector and dramatically increased areas for partnership. Belgium has several ongoing defense procurement projects with the United States and the outcome of the F-16 replacement competition will shape the future of the U.S.-Belgian defense relationship.