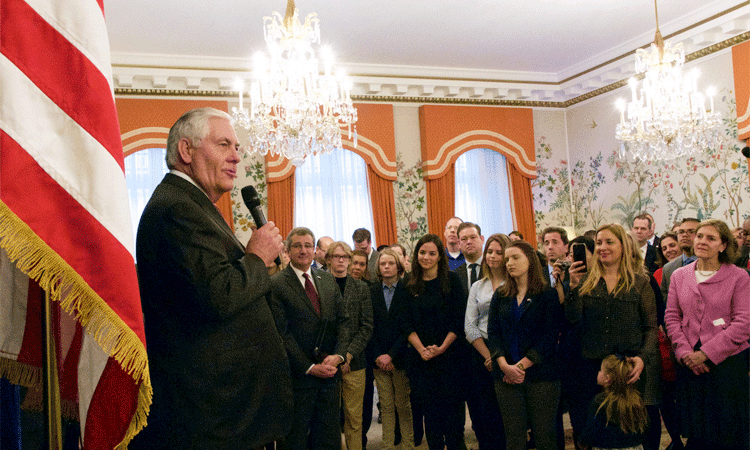 SECRETARY TILLERSON: Thank you, Ambassador Hutchison, for that very warm introduction. And the Ambassador and I have known each other for many, many years. We hail from the great state of Texas, we share friendship through our alumni association – (laughter) – at the University of Texas. We are devout Orangebloods, as they say. But thank you very much.

I also want to recognize the leadership of our new charge d’affaires, Lussenhop and Shub. And I’ve commented on this many times with respect to our situation at the State Department, where we’re still awaiting a lot of nominees to clear processes and to be confirmed. And you’ve seen I get a little criticism for that from time to time – (laughter) – from people, and the thing that – and I really do mean this sincerely – I’m so blessed and impressed with the people that we have that are willing to step up in these acting roles. These are superb individuals, highly qualified for what they’re doing.

The State Department is not missing a beat just because we’ve got some nominees that are still working through the process, and I’m very grateful for their service. I know it is a difficult situation when you’re in an acting role, but I have yet to encounter anyone who has not stepped up and fully assumed the responsibilities. And I just want to say again how much I appreciate both of your willingness to serve in that regard.

It is a great honor to serve in this role. And many of you know when then President-elect Trump asked me to take this on, he and I had never met. The day I met him was the day he asked me to do this, so it was a bit of a shock for me. But it’s been a real honor to serve. It’s been a whirlwind because the day we stepped in we had a lot of challenges on our plate. But I want to tell you, your State Department, your colleagues all over the world have done a remarkable job putting policy in place, beginning to execute against the policy. And while we don’t have any wins on the board yet, I can tell you we are much better positioned to advance America’s interest around the world than we were 10 months ago, and it’s all attributable to the great men and women of this department.

I also want to thank all of the trilateral mission folks here for how you represent us in the various interests here. The willingness of families to come to a foreign country and serve, and I know it’s a – there is a certain level of sacrifice that goes when you have to take an overseas assignment. I did that a little bit in my prior life, and I know what it means to miss birthdays and miss weddings and miss anniversaries and miss ballets and plays, and – because I went over unaccompanied. But I’m pleased to see families here. It’s a great experience for the families as well, and hopefully when it’s all said and done it’s a plus-plus for all of you and the experiences that you get doing this.

I also really want to acknowledge and express our thanks for our locally employed staff. You’re the continuity. As you know, many of your colleagues from the U.S. and from other parts of the world and the State Department come and go, they rotate in and out. You’re the glue that kind of keeps things going as they come and go, and you’re extremely important to us in our ability to be successful here, so thank you as well for your contributions.

I want to say just a couple of words about the State Department. The redesign, which everyone seems to be an expert on – (laughter) – we’re actually going to be doing some town halls here before the end of the year, because the teams, your teams – and this is an employee-led effort – all the teams are led by your colleagues at the State Department. We’ve had multiple teams working on the redesign. We’ve been through phase one, now we’ve just completed phase two, and we’re going to transition to phase three, which is now execution.

And so now we’re in a position to really talk about some concrete things. And there’s two kind of broad elements of this, if I could have you think about it this way: There’s a huge leadership element where we see we need to do some things with a lot of the systems and developing people, servicing their needs, and a lot of leadership areas that we’re going to address. And then there’s what I call the modernization of the State Department. And modernization is anything from having an IT system that’s in the cloud and lets you work efficiently, to modernizing a lot of our practices and policies and principles to recognize today’s working families. The workforce has changed, and over the last 20 years State Department policies haven’t necessarily changed with it. So we have a lot of modernization to do from a policy standpoint.

We have some modernization to do with how we get things done efficiently and effectively – again, using today’s approaches. So again, your colleagues have really led this effort. They’ve met with a lot of great ideas out, and now we’re ready to begin to execute against those. So we’ve got some programmatic areas and we’ve got some projects to undertake. We’re going to talk some more about that in the coming days and share with you the specifics.

We’ve got what we call some quick wins. I think you’re going to be happy with some of the quick wins that we’re going to announce here in the next couple of weeks because I think they get right to some of the issues that we’ve heard from you in the listening exercise. And for those of you that participated back when we did the survey, 35,000 of you responded. That’s where all these ideas came from. Over 300 face-to-face interviews. And we’ve kept the portals open so you can continue to put things into the process, and I can tell you that people look at every idea that comes in and it gets incorporated into the work that others are doing.

So we’ll have more to say about that to you in the next couple of weeks, before the end of the year. We’ll share some things with everyone so you know where this is going. It really has one objective in mind, and that’s to allow you to be more effective at what your talents already allow you to do, and also to prepare you to do more and allow you to have a much more rewarding career and do it in a way that isn’t so frustrating sometimes because some of the processes you have to interface with are frustrating. So we’re going to be addressing a lot of that, and hopefully when it’s all said and done you’re going to have a much more satisfying work environment, a great career ahead of you, and we’re going to be much more effective and much more efficient in how we do it. That’s really the objective of the whole exercise. There’s nothing more to it than that.

So again, thank all of you for what you do. It’s an honor for me to lead this organization. You make me proud every day. I’m inspired by every one of you when I come to work every day, so thank you for what you do and thanks to our three leaders here as well. Thanks. (Applause.)