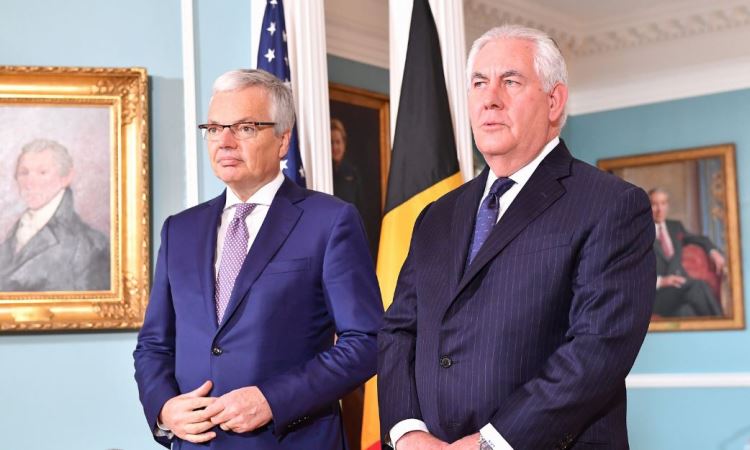 U.S. Secretary of State Rex Tillerson address reporters at the U.S. Department of State in Washington, D.C. on November 1, 2017. [State Department Photo/ Public Domain]
SECRETARY TILLERSON: Good morning, all. I want to welcome Deputy Prime Minister Reynders of Belgium to the State Department. It’s a pleasure to have you here.

SECRETARY TILLERSON: I do want to make a comment on yesterday’s events in New York City. Of course, we extend our condolences to the families and loved ones of all the victims. This has turned out to be – have been an international event in terms of the victims themselves. We now know we have one Belgian citizen who died in the attack yesterday and five Argentinian citizens, and we have additional Belgian citizens that were injured as well.

We really stand in complete solidarity with Belgium, Argentina, and all other countries against these acts of terrorism. Once again we’ve seen the evil face of terror in our own borders, but this is a face that knows no borders. And certainly, Belgium, Europe, and other countries have had to deal with this evil that confronts us from time to time. We welcome and appreciate the strong coalition of all partners in this fight against terrorism globally, and we will continue that fight until we can eliminate this threat to all American citizens and our friends and allies around the world as well.

So again, thank you, Deputy Prime Minister. Appreciate you coming to see us.

FOREIGN MINISTER REYNDERS: Thank you. Thank you very much for such a welcome. I’m very pleased to come back here to the State Department.

And unfortunately, I was yesterday in New York and I have listened just before to take a train to Washington some information about a terrorist attack, and I expressed my solidarity and the solidarity of Belgium to the American people and the American authorities. And then I have received information about the fact that we have lost a young Belgian woman of 31 years old, and then we have seen that it was also (inaudible) three injured people in the different hospitals.

I want to first thank the American authorities for the first aid services, the medical services, and all the different actions it was possible to organize just after the terrorist attack. Of course, we are sharing the same kind of situation in Europe or in the U.S. or in other part of the world, and we try to fight together against terrorism. We are in the same coalition against Daesh, we fight to rebuild some countries in the world, but I’m sure that we need also to exchange the best practices to fight against radicalization, homegrown terrorism, homegrown violent extremism. It’s a real fact. We have seen that in London, in Berlin, in Paris and Nice, and also in Belgium, and now again in the U.S.

So I am very pleased to listen from you about the condolence of all the families because I have had some people on the phone since yesterday. And I want to assure you that we will continue to work together and to fight together against terrorists. It’s a global challenge and it’s very important to stay together in such a very dramatic situation. Thank you.

SECRETARY TILLERSON: Thank you. Thank you, thank you very much.

SECRETARY TILLERSON: I believe that’s all a part of the legislation that’s being considered. Thank you.