Home Startpagina | News & Events | Remarks at the Commemoration of the 100th Anniversary of the U.S. Entry in World War I 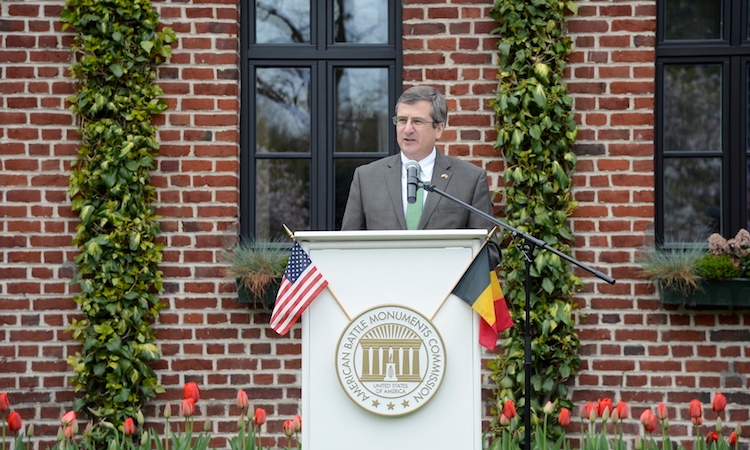 CDA Lussenhop speech Commemorating the Centenary of US entry into WWI

Lee Litzenberger, Chargé d’Affaires to our U.S. Mission to NATO

Representatives of Australia, Canada, France, Germany and the United Kingdom

Representatives of the Belgian and Flemish governments, both military and civilian

I am honored to join you today at the Flanders Field Cemetery.  Around us are crosses and stars of David bearing the names of Americans who died or went missing during the Great War.  Today, we mark their sacrifice and formally open a newly re-modeled Visitors Center that tells the story of the American experience of World War I.

For the past four years, the world has been commemorating the centenary of World War1 – a truly global conflict that engulfed the lives of millions of soldiers and citizens from great empires to small nations.

Today marks an important centenary for the United States – 100 years ago today, on April 6, 1917, the United States declared war on the German Empire.  This was a turning point in American history and further pushed our young nation into a role of global involvement and leadership.

But even before April 6, 1917, the people of the United States were acutely aware of the suffering and carnage taking place in Europe.

The work of the Committee for Relief in Belgium – one of the first international humanitarian relief programs – depended entirely on contributions from average American citizens.  The Committee for Relief brought food and supplies to millions of Belgians impacted by the conflict.  The flour bags that arrived from the U.S. were often embroidered and decorated by Belgian women and sent back to the United States in gratitude.  These artifacts can still be seen in museums both in Belgium and the U.S.

Following our declaration of war on this day one hundred years ago, the United States built and supplied an army that grew to four million strong within the year.  By the autumn of 1917, young men from Peoria, Illinois were standing next to those from Christchurch, New Zealand; Newcastle, England; Toronto, Canada; Melbourne Australia; and Waregem, Belgium.  They fought, in the words of President Wilson, “… for a universal dominion of right by such a concert of free peoples as shall bring peace and safety to all nations and make the world itself at last free.”

More than100,000 Americans died in this conflict – 368 rest here at Flanders Field American Cemetery, where the people of Belgium have never forgotten them.

Local families have adopted and cared for these graves, often passing the responsibility from generation to generation.  Local schoolchildren have assembled here to sing the U.S. national anthem every Memorial Day since the 1920s.

Mr. Mayor, I know you were one of those children who sang every Memorial Day, and I thank you and your community for remembering and honoring our fallen.

The ties of friendship and alliance that bind the United States and Belgium were forged in the conflicts of World Wars 1 and 2, and strengthened in the many decades as allies and partners during the Cold War and beyond.  Today, Belgian forces join American and others in helping secure NATO’s eastern flank; in providing training, advice and assistance to Afghan security forces; and in the Coalition to defeat the Islamic State and put an end to international terrorism.  The Belgian military and defense establishment has proven itself a valued and critical partner to advance peace and security.

The First World War was a global conflagration that altered the course of history.  Many of the greatest challenges we face as nations today have the earliest roots in that conflict.  The war was fought in Europe, the Near East, and Africa; in the trenches and in the mountains; in the skies and at sea.  The wars’ impact on art, culture, business, education, medicine, transportation and so much more are still felt today.

Whoever you are, wherever you are, you are living in a world that has been shaped and defined by the First World War.

I would like to end by thanking everyone for being here today to honor those who fought and died.

To all those who are representing their country from the military, diplomatic corps and other callings, thank you  for your dedicated service.

A special thanks to the people of the City of Waregem – especially Mr. Mayor – and other officials and volunteers who have worked closely with us for decades.

Thanks also to the American Battle Monuments Commission, which keeps this memorial and cemetery in pristine condition day in day out, rain or shine, and ensures that the sacrifice of our soldiers buried here will not be forgotten.

Mr Wessels, Superintendent Aresenault, Ms. Vanderjeugd and all staff members of the Flanders Field American Cemetery, congratulations on the opening of this new center.