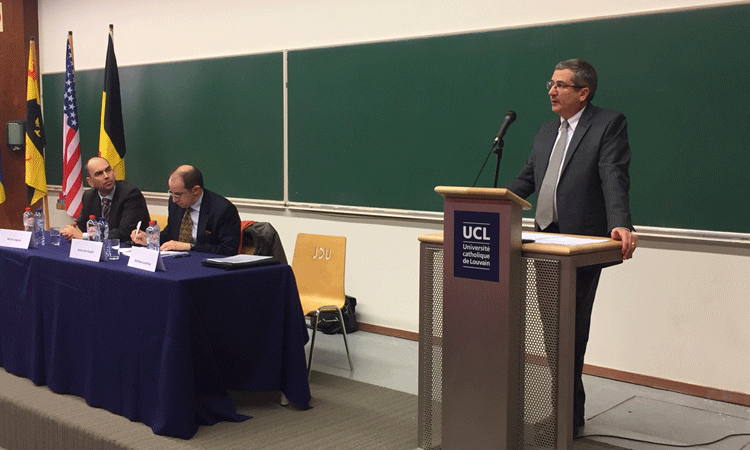 It is a pleasure to be in Louvain-la- Neuve today. This is my first visit, and I look forward to spending more time here and visiting your new museum.

I have worked in 9 countries on four continents over my 27-year career. I can tell you Belgium is one of very few countries that shares with the United States a common history – and collective tragedy – that serves as the bedrock of our modern day relationship.

It was during the darkest days of the World Wars that our partnership was forged. The Great War was the first global conflict, and robbed us of millions of soldiers and citizens, engulfing the greatest military empires and modest, neutral nations alike. World War II saw additional horrors and destruction across Europe.

I would ask you to pause for a second and think about how in your lives, when you’ve gone through a traumatic episode with a friend or family member, how that relationship became stronger through the experience you endured together. You will look back 40 to 50 years from those difficult times and have a special bond with that person because of what you shared.

I want you to think about that when considering our two countries’ shared history and how it continues to bind us together, a century later. While I can point to any number of specific moments in our security relationship, especially during WWI and WWII, it’s impossible to quantify the effects of dozens of battles on two countries and a dozen generations of their citizens. The sheer scale of tragedy and loss defied description even at the time. Now, as statistics, one easily turns numb to the numbers. This is why I prefer to think about how shared hardship impacts personal relationships and how one can’t help but value such relationships more than others.

Later today, Secretary of State Tillerson will deliver a major speech in Washington DC on the subject of U.S.-European relations. I expect he will underscore the United States’ commitment to a close relationship with Europe in which our security guarantees to our European allies remain ironclad, and he will pledge that the United States continues to invest resources and attention to maintain the security of our allies and the stability of the region.

My comments on U.S.-Belgium relations come in the context of that commitment. President Trump, Vice President Pence, and the U.S. Secretaries of State and Defense have spent much time in Brussels, meeting with Belgian, EU and NATO counterparts. Secretary Tillerson will be here next week for meetings at NATO and the European Union. A commitment to a strong Trans-Atlantic partnership is a key part of this administration’s foreign policy.

There are many compelling stories illustrating our countries’ common history of adversity and loss – and the bond that formed because of it. One of them is the example of the collaborations between Herbert Hoover and Emile Franqui, who came together to support millions of Belgians during and after World War I. Hoover’s Commission for Relief in Belgium (CRB) and Francqui’s Le Comité National de Secours et d’Alimentation was the first truly international humanitarian relief effort in world history. Through the efforts of Hoover in the United States and Francqui in Belgium, the CRB shipped more than 300 million kilos of flour from American mills to feed a Belgian population ravaged by years of war. Almost every day, I pass by a monument erected by the residents of Watermael-Boisfort to the crew of an American bomber shot down over that suburb of Brussels during World War II, and such monuments can be found throughout Belgium.

Just last week, I was reminded of our partnership following World War II, and the close alliance of Belgium and the United States during the Cold War, when I joined senior Belgian and American officials in the opening of a new U.S. Army Prepositioned Stocks site in Zuttendael, Belgium. After serving as a key airfield during World War II, Zutendaal became an important military storage site throughout the Cold War. The site closed only in 1999 when the prevailing geopolitical conditions seemed to indicate a remote chance of a conflict in Europe.

Sadly, conditions have once again changed, necessitating a collective response for the defense and stability of Europe. We have seen a disturbing increase in Russia’s attempts to redraw the borders of Europe by force, through its attempted annexation of Crimea, and a variety of destabilizing actions, including Russian military forces in eastern Ukraine. This new supply site is part of that response and a key component of Belgian-American security cooperation. No one wants a new Cold War, but we have seen Russian actions that warrant a strong deterrence to send a clear signal that the United States and Europe are ready to overcome any challenges to security and liberty. Belgium is an active player in this allied effort, hosting this site and also participating with the United States and other allies in air patrol missions to secure NATO’s eastern flank are crucial to maintaining European peace and stability.

Today’s security environment presents significant challenges and threats to Belgium, Europe and the United States. Tragically, our two nations have suffered terrorist attacks on our soil. Just this month I attended the funeral of Anne-Laure Decadt, the Belgian victim of a senseless attack on innocent civilians in New York City on October 31. And earlier this year, I attended the ceremony in Brussels to inaugurate a monument to victims of the March 2016 terrorist attack in Brussels, which included four Americans.

On September 12, 2001, Belgium joined our NATO Allies to invoke Article 5 of the NATO Treaty – a powerful statement of solidarity with the United States. Our common history and values have united us in the fight against terrorism, and I am proud to say that counter-terrorism cooperation between Belgium and the United States has been excellent to address this affront to our democratic values and freedoms on which our societies are founded.

Today’s challenges have social and economic repercussions that transcend political boundaries. In Iraq and Syria, unspeakable atrocities have been committed against countless thousands of their most vulnerable civilians, resulting in an enormous humanitarian and migration crisis that has challenged not only Belgium but the entire continent. Belgians should be proud that their air force is playing an active and crucial role in a multinational force to counter ISIS, one of the most violent and nihilistic terrorist movements to emerge in recent years.

Given the complexity of threats today, Belgium has adopted a sensible policy of looking to its neighbors to find able partners in air, land, and sea defense. The Belgian Navy’s integration with the Dutch is a natural choice, given the two countries’ economic and security link to their ports and the sea. Likewise, the Belgian Land Forces affiliate naturally with the French as the two nations share a history of expeditionary military operations on the African continent, for example.

For our part, the United States, as a neighbor, is extremely proud of our longstanding air partnership with Belgium – this transatlantic approach in the air domain has been an ideal complement to Belgium’s other defense relationships. NATO is, after all, about collective defense, and the U.S. has been side-by- side with Belgium operating the highest technology front-line aircraft since the beginning of the Cold War. The first Belgians to join the jet age and break the sound barrier did so in American F-84 Thunderjets in 1955. Belgians built the F-84 successor, when SABCA was a Lockheed contractor for the highly successful F-104. During the past four decades, The Belgian Air Force has operated alongside U.S., NATO, and coalition forces in its current F-16 fleet, making significant contributions from Iraq and Afghanistan to NATO Baltic Air Policing operations.

As an F-16 development partner, Belgium gained widespread recognition of its world-class aerospace industry and produced not only many of the aircraft, but enterprises such as the Belgian Engine Center also became the essential support facilities for the entire European F-16 fleet. Our modern transatlantic defense partnership has been defined by the F-16 program and we sincerely hope this partnership continues for many decades to come.

We often say that Belgium “punches above its weight” for a country the size of our state of Maryland and home to less than 12 million people. This is true in investment and trade, and is certainly true in Belgium’s contributions to international security.

You may have been following this issue in the media – Belgium is currently considering a replacement for the F-16. I am proud that the United States has proposed the Lockheed Martin F-35, a “fifth generation” aircraft, the most technologically advanced of its kind.

The United States sees great value in working with its closest defense partners like Belgium. In fact, our development partners for the F-35 are all founding European NATO members, including the United Kingdom, Norway, The Netherlands, Denmark, and Italy. We are proud of the fact that the F-35 is becoming the “European standard” for air forces on this continent, especially now that the Germans, Spanish, Swiss and Finns are also seriously considering the F-35 as their fighter of choice.

The economies of scale of the F-35 program actually make the price of the aircraft comparable to, or cheaper than less-sophisticated alternatives. There are more than 3,000 orders on the books, 700 of those on the continent, with more orders on the way. That means the cost of each F-35 decreases as its production line becomes more efficient – due to the experience of producing it in larger quantities.

Perhaps the most talked about benefits for Belgium’s next aircraft is what this means for Belgium-based industry. Belgium’s strong aerospace sector will likely be very competitive for contracts to sustain and support the F-35. We are already seeing signs of these economic benefits with the recent ASCO announcement that it will become part of the F-35’s global supply chain.

In closing, given our shared history, common values and collective hardship, our relationship is greater than the sum of its parts. We cannot define it by a single battle, tragic event, or humanitarian success story. Our shared history for the past one century has been one of partnership on many fronts. And as European countries strive for more integration and enhanced cooperation, there is no reason that this trend means less emphasis on the historically successful Trans-Atlantic partnership with the United States.

Belgium and the United States of America share an our unbreakable commitment to do whatever it takes to defend both our nation’s freedom and democracy. That was as true in the 20th century, and it is true today. Whatever the future may bring, as I look back on our more than 185 years together, I am convinced that our transatlantic partnership will remain essential to the future of both our nations.

Thank you and I am happy to answer some of your questions.