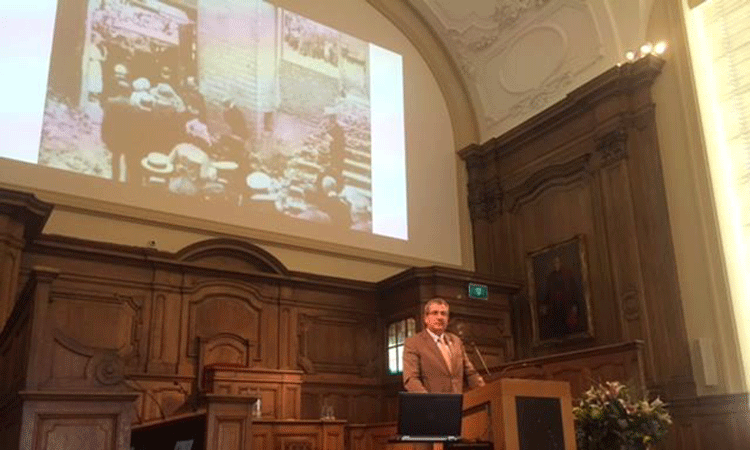 Remarks by Chargé d’Affaires Lussenhop at the Leuven WWI Conference

at the international colloquium “Revival after theGreat War: Repair, Rebuild, Remember,” May 9, 2018.

It is an honor to say a few words at the closing of this important conference. I want to thank the University and the City of Leuven for organizing this conference over the last two days as part of the 100th anniversary of the end of WWI. Given Leuven’s well established place in World War I history, I cannot think of a more fitting location to have this conference. Let me take a minute to congratulate the University on being named the most innovative in Europe for the third year in a row. A great achievement that speaks to the strength of this university and of Belgium as a center of educational excellence.

For Americans and others around the world who lived thousands of miles away, the story of what happened here during the early years of the war symbolized thesenseless destruction of World War I. After the horrific devastation and loss of life in August 1914, the world rallied around Leuven. “Remember the burning of Louvain” was a common theme in Allied propaganda during the war. The story of the loss of the medieval library became well-known to Americans, as if the tragedy had taken place on our own soil. The significance of our gathering today in the very building that housed the library in 1914, nearly 104 years later, is not lost on me or anyone
else.

The reports of what happened in Leuven from visiting diplomats, journalists, and dignitaries spread around the world. One of my predecessors at the U.S. Legation in Brussels in 1914 was Hugh Gibson. He wrote the following on visiting Leuven after the invasion:

About half way around the ring of boulevards we came to burning houses. The outer side of the boulevard was a hundred feet or so from the houses, so the motor was safe, but it was pretty hot and the cinders were so thick that we had to put on our goggles. A lot of the houses were still burning, but most of them were nothing but blackened walls with smoldering timbers inside. Many of the front doors had been battered open in order to start the fires or to rout out the people who were in hiding.
… Then we began to see more ghastly sights– -poor civilians lying where they had been shot down as they ran– -men and women– -one old patriarch lying on his back in the sun, his great white beard nearly hiding his swollen face all sorts of wreckage scattered over the street, hats and wooden shoes, German helmets, swords and saddles, bottles and all sorts of bundles which had been dropped and abandoned when the trouble began. For three-quarters of a mile the boulevard looked as thought it had been swept by a cyclone.

While basic reconstruction started during the war, the vast project began in 1919 and mainly in the 1920s. I have walked around Leuven and seen the houses with the1914 symbol on them that were rebuilt in the 1920s. You can literally follow the path of reconstruction and rebirth around the city.

The fundraising program and construction of a new university library is well known to all of you here. Donations raised by academic institutions across the United States helped to build a new university library that stands as both a prominent war memorial and a unique American building in Belgium. It is often one of the first visits for new Ambassadors and American diplomats, along with members of congress and two First Ladies of the United States.

The Library stands as a testament to the unique bond between our two countries. I have worked in 9 countries on 4 continents over my 27-year career. I can tell you Belgium is one of very few countries that shares with the United States a common history – and collective tragedy – that serves as the bedrock of our modern day relationship.

The connection between the United States and Belgium runs deep. This year marks the 186th anniversary of diplomatic ties between Belgium and the United States, and our shared military history began 100 years ago on the battlefields in Belgium and France. It was during the darkest days of the World Wars that our partnership was forged. The Great War was indeed first global conflict, and robbed us of millions of soldiers and citizens, engulfing the greatest military empires and modest, neutral nations alike. World War II saw additional horrors and destruction across Europe and the world.

I would ask you to pause for a second and think about how in your lives, when you’ve gone through a traumatic episode with a friend or family member, how that relationship became stronger through the experience you endured together. You will look back 40 to 50 years from those difficult times and have a special bond with that person because of what you shared.

I want you to think about that when considering our two countries’ shared history and how it continues to bind us together, a century later. While I can point to any number of specific moments in our security relationship, especially during WWI and WWII, it’s impossible to quantify the effects of dozens of battles on two countries and a dozen generations of their citizens. The sheer scale of tragedy and loss defied description even at the time. Now, as statistics, one easily turns numb to the numbers. This is why I prefer to think about how shared hardship impacts personal relationships and how one cannot help but value such relationships more than others.

The ties of friendship and alliance that bind the United States and Belgium were forged in the conflicts of the 20th century, and strengthened in the many decades as allies and partners during the Cold War and beyond. Today, Belgian forces join American and others in helping secure NATO’s eastern flank; in providing training,
advice and assistance to Afghan security forces; and in the Coalition to end the scourge of terrorism.

Our leaders at the highest levels have come to Belgium to underscore the United States’ commitment to a close relationship with Europe. It’s notable that within hours
of his swearing-in ceremony, our brand new Secretary of State Mike Pompeo flew to Brussels to attend a NATO foreign ministerial. His presence here demonstrated that
our security guarantees to our European allies remain ironclad we will continue to invest resources and attention to maintain the security of our allies and the stability of
the region.

My comments on U.S.-Belgium relations come in the context of that commitment. President Trump, Vice President Pence, and the U.S. Secretaries of State and Defense
have spent much time in Brussels, meeting with Belgian, EU and NATO counterparts. A commitment to a strong Trans-Atlantic partnership is a key part of
this administration’s foreign policy.

Given our shared history, common values and collective hardship, our relationship is greater than the sum of its parts. We cannot define it by a single battle, tragic event,
or humanitarian success story. Our shared history for the past one century has been one of partnership on many fronts. And as European countries strive for more
integration and enhanced cooperation, there is no reason that this trend means less emphasis on the historically successful transatlantic partnership with the United
States.

At the beginning of my remarks, I mentioned that I could not think of a better place for this conference than Leuven. Not only because of the past; more importantly
because of what it represents for the future.

The world learned of Leuven as symbol of the horrors of war 100 years ago but is now a symbol of peace and prosperity. Home to thousands of university students
from all over the globe; home to IMEC, one of the leading microchip research centers in the world; the seat of AB INBEV, one of the largest multinational brewing
companies in the world, and many others.

This gives us all hope that countries and cities ravaged by war today can be rebuilt and not only thrive again but become centers of learning and development.
The students here today will work with their peers around the world to help build a lasting peace, one that is based on acknowledging our sometimes difficult history, as
we work toward a greater peace and security for all.