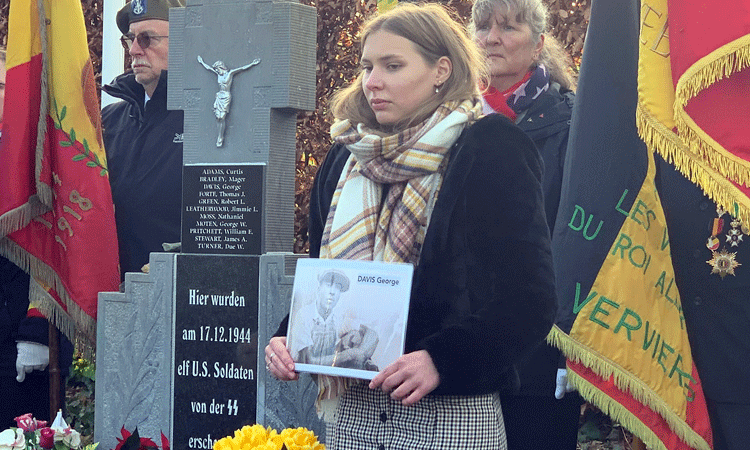 Seventy-five years ago today, where we now stand, 11 African-American soldiers were murdered during the earliest days of the Battle of the Bulge. Cut off behind enemy lines after a barrage of heavy fire from the Germans, these 11 soldiers struck out, hoping to reach American lines. Cold, hungry, and exhausted, they approached the first house in the small town of Wereth and were welcomed and fed by Matias Langer and his family. The family had provided shelter for others who fled Nazi oppression. Not long after they arrived that afternoon, SS troops approached the house, probably having been tipped off by a Nazi sympathizer in this part of eastern Belgium that had previously belonged to Germany. The American soldiers quickly surrendered. They were taken prisoner, made to sit for hours in the cold, then marched down the road. In the morning, villagers discovered their bodies abandoned in a ditch near a cow pasture.

Many weeks later, when their remains were discovered by U.S. forces, it became clear that the men had been tortured and illegally executed by SS troops on the day of their capture. This was a heinous and racially-charged war crime committed during America’s bloodiest European battle of the Second World War.

Although documented at the time, the memory of this massacre became a rarely-read footnote in the massive annals of that brutal war. Along with the many other African-American soldiers that fought in World War II, these young men were some of the “invisible” soldiers whose service was not well known or recognized. That is until 1994, when Herman Langer, who had witnessed that day as a 12-year-old boy, erected a cross in the victims’ memory. It had been fifty years since that horrific day. In 2001, a group of private citizens from Belgium and the U.S. erected a more substantial memorial and embarked on a publicity campaign to make sure that the world discovered the story of the soldiers of Wereth. A few decades on, the long-delayed recognition of their sacrifice has now become a priority for those of us who continue to recall and remember the debt we owe to the Greatest Generation.

The men executed 75 years ago this afternoon have come to be known as the Wereth 11. Their names were:
[1] Curtis Adams of South Carolina;
[2] Bradley Mager of Mississippi,
[3] George Davis Jr. of Alabama;
[4] Thomas Forte of Mississippi;
[5] Robert Green of Georgia;
[6] James Leatherwood of Mississippi;
[7] Nathaniel Moss of Texas;
[8] George Moten of Texas;
[9] William Pritchett of Alabama;
[10] James Stewart of West Virginia; and
[11] Due Turner of Arkansas.

Seventy five years later, it would seem impossible to find any meaning in the horror that these men endured. But we try. And we remember days such as December 17, 1944. And we stand as witness in our contemporary times to the ultimate sacrifice that these American soldiers – these African-American men – these war crime victims – made.

For our few years here on this earth, we must do our part to keep their memory alive, and we must pass that sacred duty on to the generations to come. As long as there is a Kingdom of Belgium, and as long there is a United States of America, we must and we will remember the Wereth 11.