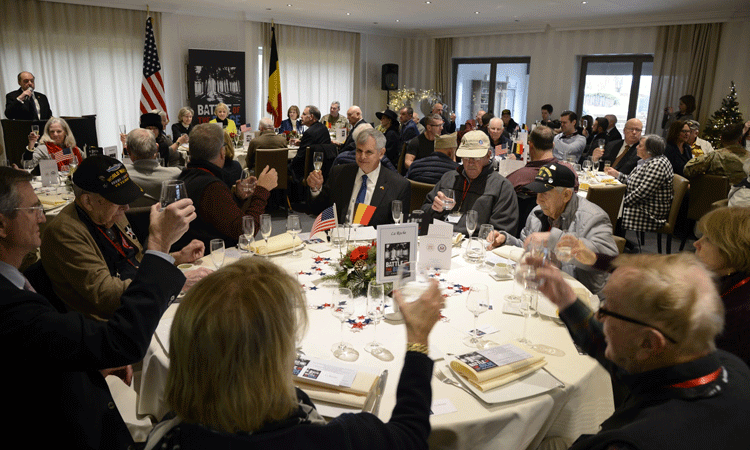 Ambassador Gidwitz Remarks at the Battle of the Bulge Veterans Lunch

I’m so pleased to be here today to welcome all of you to the inaugural event of our multi-day commemoration of the 75th anniversary of the Battle of the Bulge.

And also, to celebrate the completion of the first phase of the Mardasson Memorial renovation. I’d like to welcome – and thank in particular – Secretary Matz of the American Battle Monuments Commission.

He and his staff are our co-hosts for this wonderful luncheon today – and partners in the Mardasson restoration project – and I couldn’t be happier to be in the Secretary’s company on a day such as this.

We are also especially honored to have a delegation of United States Senators, led by Senator Boozman, and a number of American donors who helped make Phase 1 of the Mardasson restoration project a reality.

The people we’re really here to honor, however, are these exceptional men– these veterans of the Battle of the Bulge who have crossed the Atlantic Ocean, once again, to be part of this important anniversary.  These men are the reason that we are here today and, indeed, it is what they did that enabled us to be here today.

Yet I think many of them would disagree with me. They would say that the true reason we have come here is to honor the memory of their brothers-in-arms, those thousands of men who died defending liberty during that bleak and hellish battle in the final weeks of 1944. Well, it’s hard to argue with that. But we do honor these brave veterans nevertheless, the heroes of an epic battle of our greatest war. They are what have rightly come to be known as our greatest generation.

Please raise a glass with me in honor of the veterans who have traveled from the U.S. to be here this weekend. They are the defenders of freedom. They are the liberators of Europe. They are the very best of America.

To all of you.