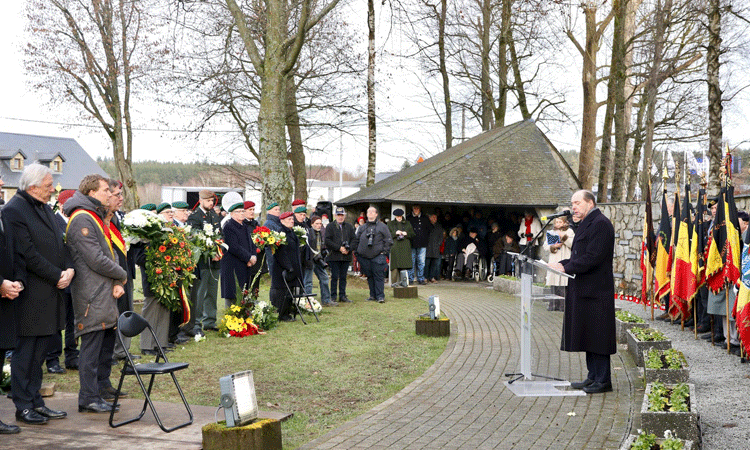 As grim as war can be, some moments are more searing – and more disheartening – than others.

Today we’ve come together – here – to remember such a day.

That day unfolded 75 years ago, right where we stand, and in the fields nearby. In the chaos of the just-begun Battle of the Bulge – America’s bloodiest battle in the European theater – an order was given to unlawfully execute 120 American prisoners of war being guarded by an SS combat unit.

Among the blazing machine guns, seven dozen U.S. soldiers died in the snow – 84 lives meaninglessly extinguished. Yet over 40 soldiers somehow survived the massacre and lived to testify, so that future generations could know of that war crime.

More than seven decades later, it still seems almost impossible to find meaning in such horror. But we try. We remember such days. Most of all we remember the men who were killed. We even contemplate the men who pulled the triggers. And we curse the monster who gave the order to execute innocent men.

What meaning can we find other than a nation’s enduring gratitude? That noble men such as those murdered at Malmedy were our fellow Americans – our friends, our brothers, or fathers, our grandfathers, our uncles, our great-uncles.

Perhaps one other meaning can be found. Maybe it’s the opportunity for reconciliation that eventually emerges from such horror. It comforts me to have the German ambassador here today, in recognition of the horror of those moments, in this field, 75 years ago.

Today our countries are great friends and allies. I believe there is meaning in that.

As the Ambassador of the United States of America to the Kingdom of Belgium, I wish to thank all of you who have traveled to these remote fields today, and to those of you who come year after year, to remember these fallen men.

These soldiers, and their fellow fallen American comrades-in-arms, represent the best of humanity and the hope of democracy. And I myself hope that all of us can live a life worthy of their sacrifice.