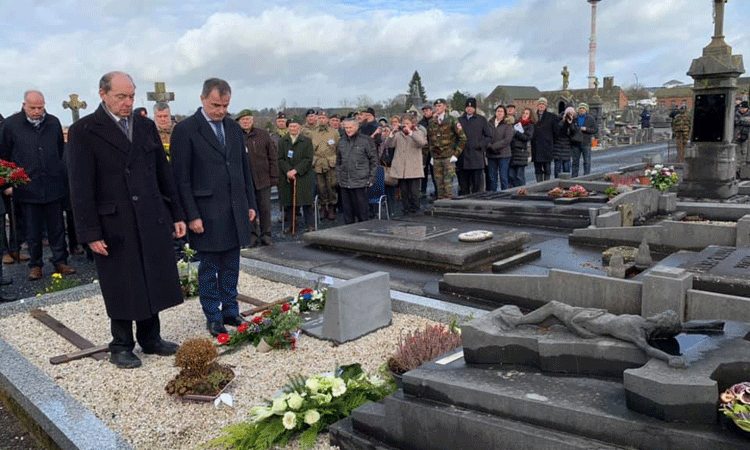 Friends and guests, please allow me to express my thanks to you for the honor of speaking at Augusta Chiwy’s grave here today.

Those who learn her story come to view Augusta as equal parts hero and inspiration. She overcame barriers of gender, race, and wartime chaos to answer her calling – that of nursing and medical service to all, regardless of where they came from or what they believed in.

During the most horrific time this city has known, during its greatest hour of need, Augusta risked her life to care for the wounded soldiers fighting for freedom in Bastogne. Working with American doctors and medics, hobbled by inadequate supplies and brutal weather, and in constant danger, she saved the lives of dozens of Americans.

Along with a fellow nurse named Renée Lemaire, Augusta showed that even during the darkest days of war, humanity is capable of great acts of compassion. She brought immense comfort to those in pain and she gave hope to those who had none. No one ordered Augusta into battle. She volunteered and simply took responsibility for doing what needed to be done. It would have been far easier to seek shelter and safety. Instead, she dove into the maelstrom – at the height of battle – with German bullets, as she remembered and told us years later, popping up small powdery puffs of snow all around her as she tended the wounded.

At the time she had no idea it was gunfire making the snow dance, as she put it.

I never had the honor of meeting Augusta Chiwy, but many of my Embassy colleagues have.

Through their remembrances one can see what a joy it was to sit with her and hear her stories and enjoy the songs she loved. Augusta possessed an enviable and infectious joie de vivre.

I’ve also learned that Augusta loved to smile and share her happiness with those around her. Once when she was introduced to thunderous applause at an Embassy event, she took the hand of one particular Embassy staffer and said, “You know, you look too serious, you really need to smile.”

I think it says everything about Augusta that even in such a moment, when she was the focus of the entire room, her most pressing thought was for the welfare of another.

So, may I say as the Ambassador of the United States of America to the Kingdom of Belgium, thank you Augusta Chiwy, from a grateful nation. You will inspire generations to come, and you will always personify the best in the long-standing friendship between the Belgian and American people.