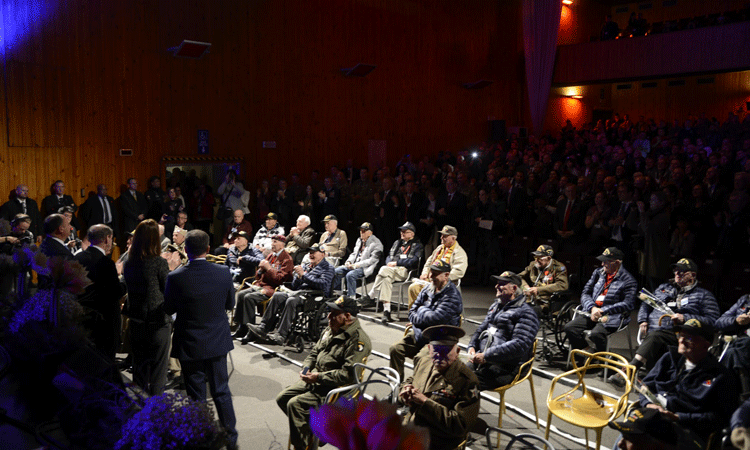 Mayor Lutgen, Prime Minister Wilmès, Madame Speaker, Senator Boozman, Congressional delegation members, citizens of Bastogne, dear Belgian friends, and American colleagues – I’m very happy to be with you all tonight as a guest of the Mayor of the City of Bastogne.

I believe this weekend will be among the most important during my stewardship of the United States Embassy. As Ambassador, I have no greater responsibility in fulfilling my duties than honoring those American servicemembers who defended Belgium, the United States, and liberty during the last century’s two world wars.

American veterans of the Battle of the Bulge are here this weekend too, to pay similar homage. Homage especially to their friends and fellow soldiers who fell on the battlefields of the Ardennes. We are honored that they return here, and we are proud of their accomplishments.

The affinity of the Belgian and American people stretches back to long before the kingdom’s founding in the early nineteenth century. Belgians and Americans have always cherished similar ideals and values.

But for as long as our histories have been intertwined, we recognize that our bond was forged during the last 100 years especially – from famine relief during the First World War, to the vicious fight for liberation during the Second World War, to the building of NATO with our enduring, multilateral alliance that has kept Europe at peace for more than 70 years.

Our economies have thrived, and our friendships have grown. Citizens of both countries know that by standing together, our families are safer and our people more prosperous than ever before.

On Monday we are proud to honor our veterans at the newly-restored Mardasson Memorial – that generous gift of the Belgian people erected in 1950 in memory of the American soldiers who died during the Battle of the Bulge.

Thanks to the benevolence of private American citizens, the memorial has received a major clean-up – with additional work still ahead – so that it will continue to stand proudly for many generations.

We are grateful to the City of Bastogne and the American Battle Monuments Commission for their assistance in making the restoration possible.

I am particularly thankful that His Majesty King Philippe will further honor the fallen at a ceremony on Monday, where the U.S. Secretary of Defense will represent President Trump.

Thank you Mayor Lutgen once again for your hospitality and for the tireless work of your staff during the restoration and planning process.

I know that Bastogne is often called Belgium’s “most American” city. For us, that is a supreme compliment, and we will do all we can to continue being worthy as the inspiration for such a label.