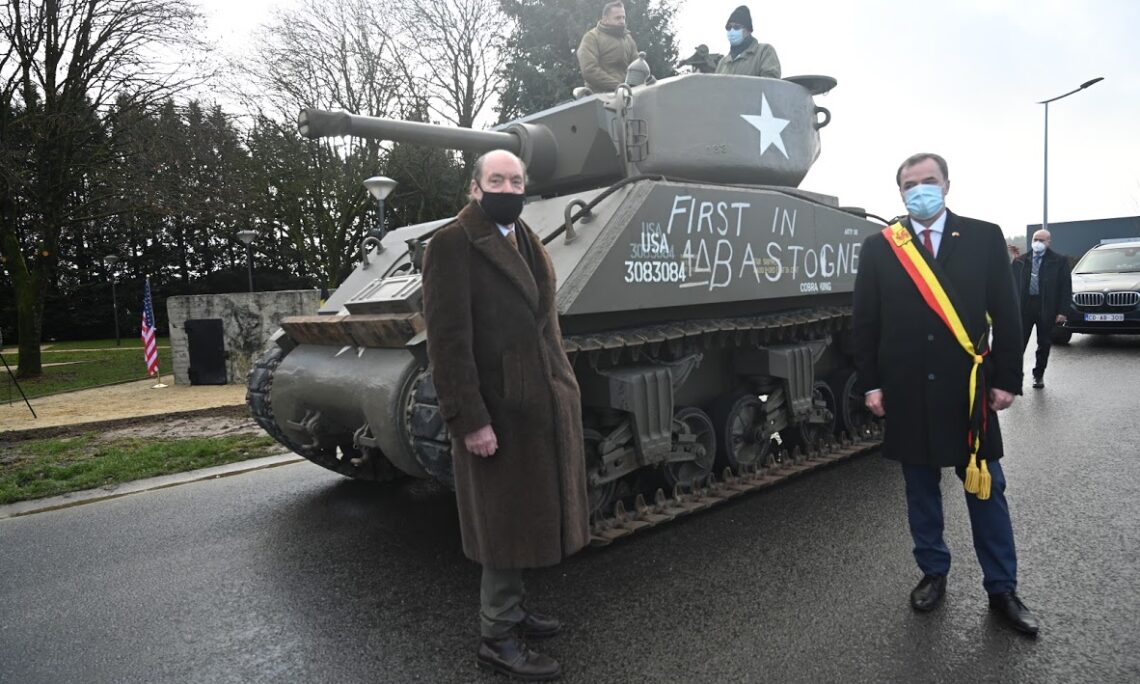 I’d like to take you back to that cold winter of 1944.  Imagine you’re part of lieutenant charles boggess’ (boh-zhesses) platoon. Your leader is determined to reach bastogne. There’s just one last obstacle – a small bunker – that you can barely see in the dark early evening of December 25. This is when Boggess and his platoon join forces with the 101st Airborne Division.  Bastogne is about to be liberated! On this day, the allied counter-attack in the Battle of the Bulge, the largest and bloodiest engagement for american troops during World War II, began.  This restored bunker, here, is where it all started.

The tank you see parked on the road, with the markings “First in Bastogne,” is one of the few remaining Jumbo Sherman tanks. This is the same model as the Cobra King that Lt. Boggess commanded during the Battle of the Bulge. His original tank is on display at the National Museum of the U.S. Army and I’m very pleased that one of the few other Jumbo tanks left has a permanent home in Bastogne.

In my time as U.S.ambassador, i’ve attended many ceremonies around the country.  I’ve made it a priority for our entire team at the U.S. embassy to acknowledge the sacrifices of the fallen through ceremonies like this one.

The lessons from the past, the examples of our heroes, their blood and sacrifice still matter today. Bastogne’s children know well that they owe their freedom to the utmost sacrifice of their grandparents’ and great-grandparents’ generations. American children know well that europe has not forgotten that ultimate sacrifice. And they appreciate it. We all must continue remembering our past.

We could not do this without you. The city of Bastogne has worked very hard over the years to keep history alive and restore these important monuments.

With utmost respect and absolute humility, i say thank you to Lieutenant Boggess and his platoon, thank you to the city of Bastogne and to all of you.