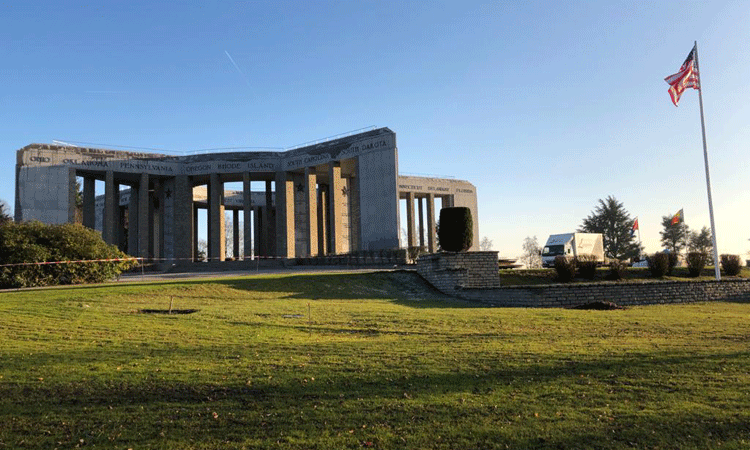 December 04 – The first phase of  the restoration of the Mardasson Memorial is complete, just in time for the key ceremonies set to take place in Bastogne for the 75th anniversary of the Battle of the Bulge.

The U.S. Embassy announced the launch of the renovation project on October 1, which included extensive cleaning of the monument and restoration of some of the stone work. The Embassy is working closely with the American Battle Monuments Commission to manage the project.  Fundraising for a second phase and a more thorough restoration is already underway. The Bastogne Memorial Fund has raised  more than $900,000 from private donations.

The Mardasson Memorial in Bastogne was built to honor the sacrifices of American soldiers killed and wounded during the German Army’s surprise Ardennes Offensive in December 1944 – January 1945. It is the only memorial that commemorates all American forces who fought in the Battle of the Bulge. As with the original project in 1950, when funds were raised by Belgian citizens, donations toward today’s restoration have come in from American citizens across the United States.

“I am excited to see the completion of the first phase of the renovation of this iconic Memorial. This is an opportunity to not only honor our fallen soldiers, but for the American people to express their gratitude to the people of Belgium for keeping the memory alive of those who fought and died for their freedom,” U.S. Ambassador Ronald Gidwitz said.

“Our gratitude to the young Americans who fell on the soil of the Ardennes is eternal. To them we owe our freedom. And to honour them we take action, today and tomorrow, to ensure that every citizen remembers and perpetuates the memory of their sacrifice for our freedom,” emphasized the Mayor of Bastogne, Benoît Lutgen.