Home Startpagina | Our Relationship | Policy & History | Marking the Centenary of the U.S. Entry in World War I | Do you know that before the U.S. entered WWI, a U.S.-Belgian project started the first international food relief operation? 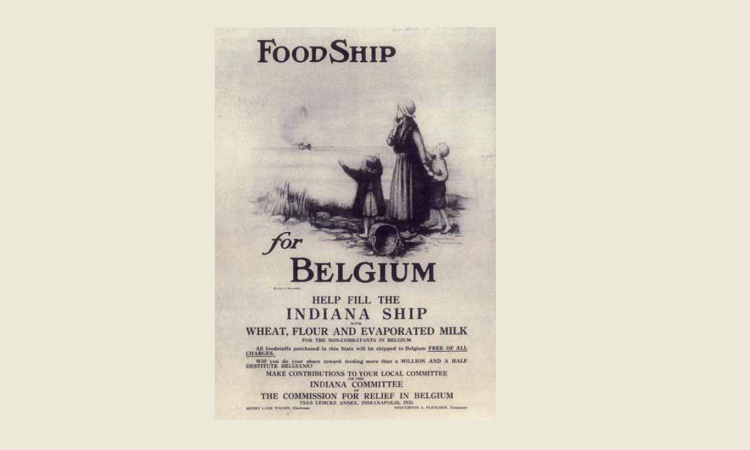 The German occupation and British blockade led to vast food shortages and the threat of mass starvation in occupied Belgium.

In what would become the first large international food relief operation, Herbert Hoover set up the Commission for Relief in Belgium. The success of the Commission was due to the strong cooperation between Hoover and his Belgian counterparts. This U.S.-Belgian project built a strong foundation of close ties that continue to this day.

Born in an Iowa village in 1874, Herbert Hoover grew up in Oregon.  Orphaned at an early age, he achieved international success as a mining engineer and world-wide gratitude as “The Great Humanitarian” who fed war torn Europe during and
after World War I. After the Armistice in 1918, Hoover, a member of the Supreme Economic Council and head of the American Relief Administration, organized shipments of food for starving millions in central Europe. He extended aid to famine-stricken Soviet Russia in 1921. When a critic inquired if he was not thus helping Bolshevism, Hoover answered, “Twenty million people are starving. Whatever their politics, they shall be fed!” In the process he developed a unique philosophy – one balancing responsibility for the welfare of others with an unshakable faith in free enterprise and dynamic individualism. In time this would lead him to feed a billion people in 57 countries.

He was elected President of the United States in a 1928 landslide victory, but within a few short months the global hero became a scapegoat for the Great Depression that put millions of his countrymen out of work in the 1930’s. His 1932 defeat by Franklin D. Roosevelt left Hoover’s once bright reputation in shambles.

Yet he refused to fade away. In one of history’s most remarkable comebacks, Hoover returned at Harry Truman’s behest to avert global famine at the end of World War II and to reorganize the executive branch of government. His ties with Belgium remained strong and he visited Belgium for the last time during the World’s Fair in Brussels in 1958. By the time of his death in 1964, Hoover had regained much of the luster once attached to his name.

Émile Francqui, born in 1863, joined the military academy at a young age. He, like other young officers, was sent to Congo Free State where he gained recognition for his vast skills and expertise.  He then left the military for a career in business and government. In 1896, he became the Belgian consul in China and stayed there until 1902. In China, he met Herbert Hoover. They were fierce business competitors, but otherwise held each other in high esteem.  Francqui returned to Belgium in 1902, and started his financial career. He became the Managing Director of the “Banque d’Outremer”, and Managing Director of the Union Minière du Haut Katanga and in 1912 he became Director of the Société Générale de Belgique.

During WWI, Francqui was Hoover’s key partner in Belgium in running the Commission for Relief in Belgium from the Belgian side, through the Comité National. They were close friends for the rest of their lives. After the war Francqui and Hoover wanted to invest in Belgian universities as a means of rebuilding the country. In 1920, the University Foundation was founded by Émile Francqui, as well as the Belgian American Educational Foundation (BAEF) designed to foster the exchange of students between Belgium and the United States. In April 1924, Francqui participated in the creation of the Dawes Plan to find a solution for the collection of the German reparations debt following World War I.

In 1932, Francqui and Hoover created the Francqui Foundation for the support of basic scientific research in Belgium.

Herbert Hoover and Belgian Relief in World War I

Herbert Hoover and Belgian Relief in World War I

“One American will be forever linked in history with Belgium’s travail in that awful war. His name, of course, is Herbert Hoover. After the battle of the Marne, giant European armies bogged down in the trenches, and famine threatened beleaguered Belgium, a highly industrialized nation of 7 million dependent upon imports for three-quarters of her food. On one side the German army of occupation refused to take responsibility for victualing the civilian population. Let Belgium import food from abroad as she had done before the war, said the Germans. On the other side stood the tightening British naval blockade of Belgian ports. Let the Germans, as occupiers of Belgium, feed its people, said the British.

Besides, they argued, how could one be sure that the Germans would not seize imported food for themselves?

As the tense days passed in the early autumn of 1914, food supplies dwindled ominously in Belgium. To the outside world went emissaries pleading for the Allies to permit food to filter through the naval noose. Finally, on October 22, after weeks of negotiations, Herbert Hoover established under diplomatic protection a neutral organization to procure and distribute food to the Belgian populace. Great Britain agreed to let the food pass unmolested through its blockade. Germany in turn promised not to requisition this food destined for helpless noncombatants.” https://www.archives.gov/publications/prologue/1989/spring/hoover-belgium.html