Home Startpagina | Our Relationship | Policy & History | Marking the Centenary of the U.S. Entry in World War I | America enters the war on April 6, 1917 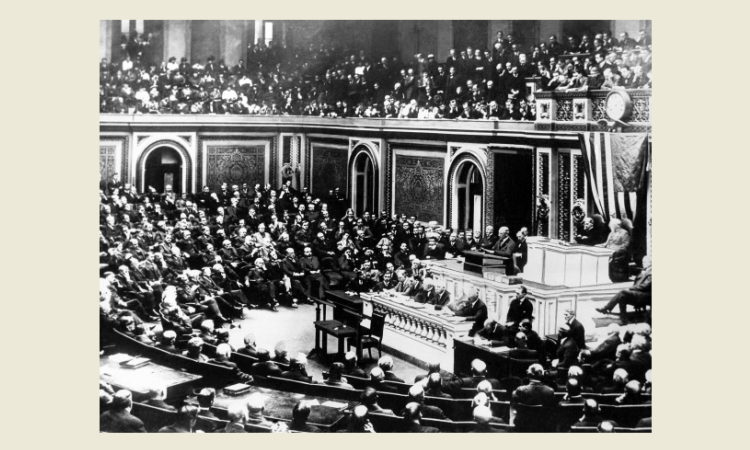 President Wilson requesting authority to declare war on Germany on April 2, 1917 to a joint session of Congress

On April 2, 1917, President Woodrow Wilson went before a joint session of Congress to request a declaration of war against Germany. Wilson cited Germany’s violation of its pledge to suspend unrestricted submarine warfare in the North Atlantic and the Mediterranean, as well as its attempts to entice Mexico into an alliance against the United States, as his reasons for declaring war. On April 4, 1917, the U.S. Senate voted in support of the measure to declare war on Germany.

While the majority of American forces fought in France, four divisions played a prominent role in Belgium in the final offensive of 1918.

The American Legation in Brussels closed its doors and moved its operation to Le Havre alongside the Belgian government in exile.

Command of the American Expeditionary Force (AEF) was given to General John Pershing. While the French and British commanders wanted American units to immediately replace weakened British and French troops, Pershing insisted that the American troops remain together and under American command.

In addition to these four divisions, prior to U.S. entry into the war, other Americans volunteered to join Canadian, British or French forces. Most of them remained with their units after the U.S. entered the war, and there are more than 500 Americans buried in Belgium in Commonwealth cemeteries.