Home Startpagina | Our Relationship | Policy & History | Marking the Centenary of the U.S. Entry in World War I 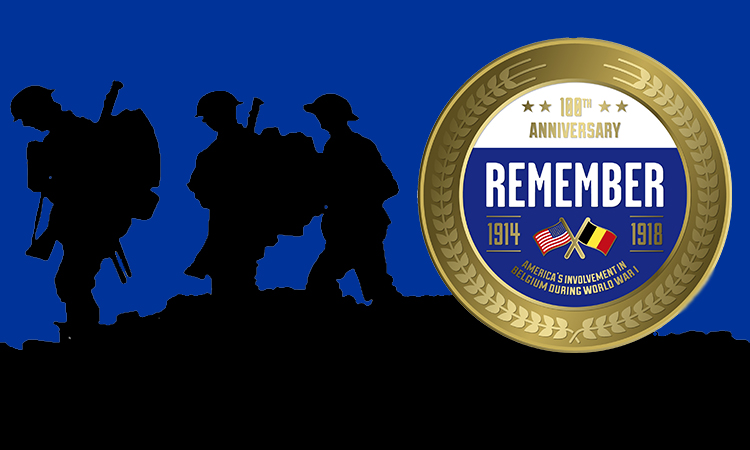 U.S. Embassy Brussels is commemorating the centenary of our nation entering World War I and highlighting stories of courage by the U.S. diplomatic corps and American citizens in Belgium.

World War I changed Europe, Belgium, and the United States. It changed the way we thought of war, of peace, and of the importance of working together to provide humanitarian assistance and to preserve freedom around the world. One hundred years after the onset of World War I, we reflect on the horror of a global conflict that encompassed the experiences of millions of soldiers and citizens, of towns and families, of great empires and small nations. When the war was over, sixteen million were dead, another twenty millions were wounded.

Amidst so much tragedy, the story of America and Belgium’s war experience stands out as an inspiration. On the eve of the Great War, Americans believed their fate was separate from Europe’s. Nevertheless, the suffering of the Belgian people – the violation of their neutrality and the willful devastation of towns like Dinant and Leuven – touched American hearts and provoked not just American compassion, but also American action.

The Commission for Relief in Belgium organized by American Herbert Hoover and Belgian Emile Francqui fed millions of Belgians during and after the war.  The arrival of Doughboys at The Front gave the allies a decisive edge and helped bring the war to an end.  After the war, Americans committed themselves to helping rebuild Belgium.  American crowds received King Albert I as a hero. And Belgian-American cooperation during the war spawned educational exchanges that have built friendships between Americans and Belgians for decades ever since.

America and Belgium emerged from the war with a set of values – humanitarianism, justice, and a commitment to human dignity – that have sustained our partnership ever since.”

This page is dedicated to the spirit of cooperation between America and Belgium and especially to those who lost their lives fighting for our freedom in World War I.

They Deserve Their Own Memorial - WW1 Centennial Video