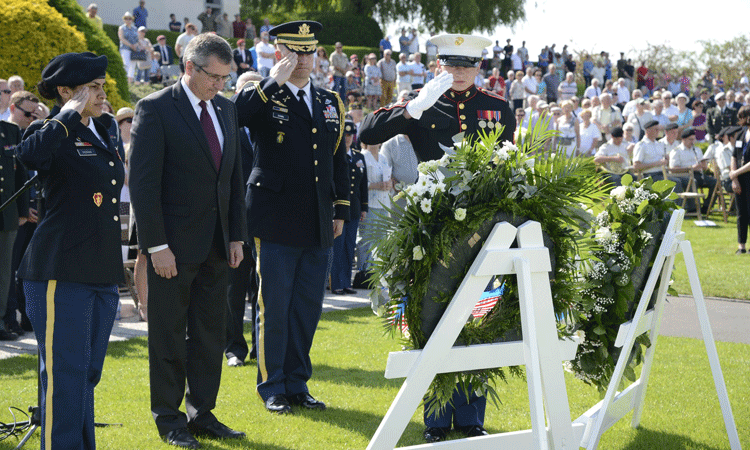 The Representative of His Majesty, the King;
Representative Jaddin;
Excellencies;
Honored Veterans and Service Members;
Family Members and Friends;

Memorial Day, originally called Decoration Day, dates back to the late 1860s as way to honor those who died during our Civil War. In 1868, then
Congressman and future President James Garfield gave the first Memorial Day remarks at Arlington National Cemetery and opened with the following words, which still hold true today: “I am oppressed with a sense of the impropriety of uttering words on this occasion. If silence is ever golden, it must be here beside the graves of fifteen thousand men, whose lives were more significant than speech, and whose death was a poem, the music of which can never be sung.”

During my nearly two years in Belgium, I have attended numerous ceremonies around the country and I am incredibly impressed by the expressions of gratitude and the genuine warmth and affection that the people of Belgium have for all those who made the ultimate sacrifice in both world wars.

If someone asks you why we do this, why we are here today?

The answer is clear:
Look around you.
We are here for them and those they left behind.

The war touched towns and communities across the United States, and this cemetery is one of the many connections that that keep memories of the fallen alive.

My mother comes from the small town of Appleton, in southern Minnesota. In 1940, the population of the town and the surrounding countryside, numbered around 1,400 people. From the first days following Pearl Harbor, the young men of Appleton joined the U.S. Army, Navy and Marines – nearly every young man in town between 18 and 25 went off to fight. 31 of them died in North Africa, Italy, Okinawa, New Guinea, Germany, and Belgium. After the war, the mayor of Appleton noticed that the number of men lost was almost equal to the number of streets in the town, and so in 1947 all of the streets of Appleton were named after each of the young men that the families of the town had sacrificed.

One of those streets is Schlieman Avenue, named after Private Max E. Schlieman, from a family farm not far from the town of Appleton. Max joined the armed forces in February 1942, at the age of 29. He entered the 507th Parachute Regiment, of the legendary 82 nd Airborne, and saw his first day of combat on D-Day, June 6, 1944 when his regiment was dropped near the French town of Caucigny, 50 kilometers from Omaha Beach. After 33 days of continuous combat, Private Schlieman and the rest of the 82nd Division returned to England. He flew back into combat on December 23 that same year, as his regiment deployed to counter the German advance during the Battle of the Bulge. He was killed in action near the Belgian-Luxemburg border on January 17 as his regiment pushed the German advance back.

Private Schlieman left behind in Appleton his parents, six sisters, and four brothers, one of whom, Emil, also joined the Army, and who survived combat in France and Germany. In Plot F, Row 12, Grave 59 lie the remains of Private First Class Max Schlieman.

Another young man from Appleton lies here as well – Private First Class Richard Nelson, who died in Belgium during the Battle of the Bulge on January 14, leaving behind a wife and son – Plot D, Row 6, Grave 58.

We owe Privates Schlieman and Nelson and their comrades a tremendous debt of gratitude that we can never repay, but we can build on their legacy by dedicating ourselves to peace and international cooperation – and the Belgium-U.S. relationship – that ensured a Europe whole, free and at peace for nearly 75 years will remain safe and secure for generations to come.

The challenges that we face in the world today – from terrorism to instability to the east of the NATO alliance – are a troubling reminder of the importance of our alliance with Europe. Belgium and the United States share an unbreakable commitment – enshrined in NATO’s Washington Treaty – to do whatever it takes to defend both our nation’s freedom and democracy. That was as true in the beginning of the 20 th century, and it is equally true in 2018.

I have no doubt that if these soldiers, who surround us as eternal sentinels of liberty, would still be with us today that they would be proud. Proud to see a democratic Europe at peace for 74 years, proud of their country and its partnership with Belgium and allied nations and partners around the world, proud to see all of you here today.