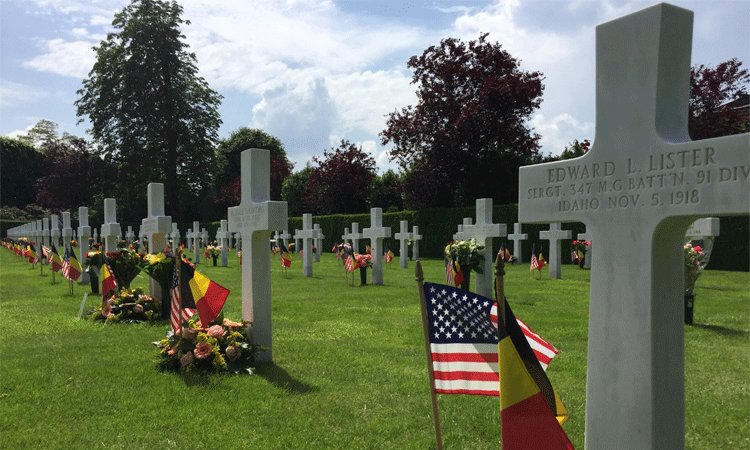 The Representative of His Majesty, the King;
Minister of Defense Vandeput;
Representative Bogaert
Excellencies;
Honored Veterans and Service Members;
Family Members and Friends;

Memorial Day, originally called Decoration Day, dates back to the late 1860s as way to honor those who died during our Civil War. In 1868, then Congressman and future President James Garfield gave the first Memorial Day remarks at Arlington National Cemetery and opened with the following words, which still hold true today: “I am oppressed with a sense of the impropriety of uttering words on this occasion. If silence is ever golden, it must be here beside the graves of fifteen thousand men, whose lives were more significant than speech, and whose death was a poem, the music of which can never be sung.”

During my nearly two years in Belgium, I have attended numerous ceremonies around the country and I am incredibly impressed by the expressions
of gratitude and the genuine warmth and affection that the people of Belgium have for all those who made the ultimate sacrifice in both world wars.

Everyone here today – from the youngest children in the audience to our honored veterans and active duty service members – help keep the  memory alive and ensure that the men and women who fought and died for our freedom will never be forgotten.

If someone asks you why we do this, why we are here today?
The answer is clear:
Look around you.
We are here for them.

We are here for all those buried here who answered the call to serve and never returned home. Soldiers like Private Wendell Ross, from the small town of Agassiz in southern Minnesota. Private Ross grew up working on his family’s farm, married, and had a son just as he was called to duty in February 1918. He joined the 119 th Infantry Regiment, which landed in Calais, France to join the fight in May of 1918. In July, the regiment was sent to the front lines east of Poperinge One of the Regiment’s officer’s later wrote, “The artillery’s activity on our part consequently called for retaliation from the enemy which made the sector one of the hottest on the front. Due to this very heavy shelling the casualties numbered more than was expected.”

One of those casualties was Private Ross, who was killed instantly when a shell landed on his position near Elzenwalle on August 4, 1918. He was buried in the British Nine Elms Cemetery, and his family back home were torn regarding the permanent disposition of his remains. Finally, in 1921, the family sent a letter requesting that his remains be buried with his comrades in Europe, saying this decision was taken on behalf of Private Ross’ son, Wendell Junior, who at that time was four years old.

We owe Private Ross and his comrades a tremendous debt of gratitude that we can never repay, but we can build on their legacy by dedicating ourselves to peace and international cooperation – and the Belgium-U.S. relationship – that ensured a Europe whole, free and at peace for nearly 75 years will remain safe and secure for generations to come.

The challenges that we face in the world today – from terrorism to instability to the east of the NATO alliance – are a troubling reminder of the importance of our alliance with Europe. Belgium and the United States share an unbreakable commitment – enshrined in NATO’s Washington Treaty – to do whatever it takes to defend both our nation’s freedom and democracy. That was as true in the beginning of the 20 th century, and it is equally true in 2018.

I have no doubt that if these soldiers, who surround us as eternal sentinels ofliberty, would still be with us today that they would be proud. Proud to see a democratic Europe at peace for 74 years, proud of their country and its partnership with Belgium and allied nations and partners around the world, proud to see all of you here today.