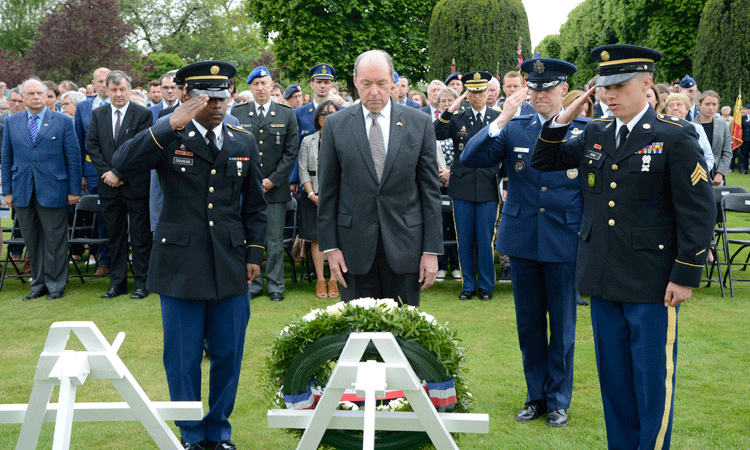 Thank you for your introduction, Mr. Sheridan. I’m honored to be with all of you today for my first Memorial Day as United States Ambassador to the Kingdom of Belgium.

I’ve been privileged to serve my country as Ambassador for close to a year now. My very first official event was to attend the Last Post ceremony at Menin Gate, to honor the Commonwealth soldiers who died on the battlefields near Ypres. Last October, I participated in a moving World War One ceremony honoring the lives of African American soldiers – many hailing from my home town of Chicago – who liberated the Belgian town of Petite Chapelle, near the French border. These events matter to me. They matter to the United States government. They matter to everyday Americans and Belgians.

In 2018, we marked 100 years since the end of World War One. Our modern day relationship with Belgium was built on the individual sacrifices of the soldiers who lie at Flanders Field. As we work with Belgium to defend Europe’s eastern borders, or counter cyber threats that jeopardize peaceful democratic norms, the sacrifices of the soldiers around us remain the beating heart of today’s transatlantic alliance.

There are countless tales of heroism among these graves. One of these heroes was Private Ernest Richard White, born in 1894 in my home state of Illinois. White’s parents were farm laborers and lived a difficult life back then. Only four of their nine children survived into adulthood. Ernest and two of his brothers served in World War One. He wrote frequently to his parents and girlfriend, inquiring of news about his brothers, and sharing tales of fighting on the front lines. Two days before being fatally shot, Ernest wrote home saying he was “somewhere in Belgium.” Ernest died on October 31, 1918 during the last Allied offensive to liberate Belgium. He is interred in Plot C, Row 1, Grave 20.

Together with the ceremonies being held at the Ardennes and Henri-Chapelle American cemeteries, we share this weekend of remembrance with 151 U.S. national cemeteries around the world. On Memorial Day, friends, families, and volunteers visit these cemeteries to place flags and keep the memory of our fallen heroes alive. From America’s Revolutionary War through today’s battlefields, as the President stated in his May 25, 2018 Memorial Day proclamation: “We remain duty-bound to honor those who made the ultimate sacrifice on our behalf and to remember them with thankfulness and unwavering pride.”

Since the end of World War One, we’ve worked together to counter the greatest threats facing each successive generation of Americans and Belgians. During and after the war, the Hoover Commission for Relief in Belgium fed some 11 million Belgians who were on the brink of starvation as a result of German occupation. Belgium would later become an original founding member of the North Atlantic Treaty Organization. Belgian troops would fight alongside American and other soldiers on the Korean Peninsula. Our shared investment in defense capabilities halted and ultimately reversed the spread of Soviet communism, protecting democracies in Europe and around the world and helped create the conditions necessary for the emergence of the European Union and other multilateral institutions that would preserve the peace and promote prosperity.

Peace is only at risk when individual citizens lose sight of the intrinsic link between freedom and duty. Our brave soldiers interred at Flanders Fields understood that connection, and paid the ultimate price for it. For them, we renew our commitment to remain duty-bound, and work towards a Europe and a United States that remains free and at peace for decades to come.