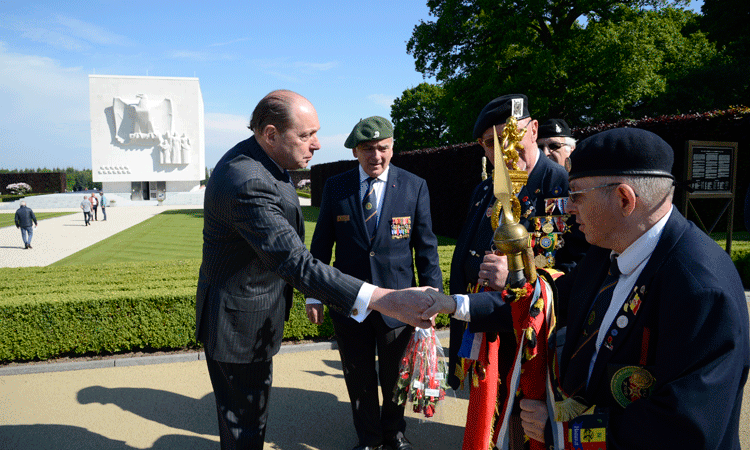 Thank you for your kind introduction, Mr. Sheridan. I’m honored to be with all of you today for my first Memorial Day as United States Ambassador to the Kingdom of Belgium.

I’ve been privileged to serve my country as Ambassador for close to a year now. One week ago, I was on a hillside in Wereth to remember 11 selfless African-American soldiers massacred during the Battle of the Bulge. Their story would be lost to us if not for the efforts of the Langer family, brave Belgians who gave the men shelter before they surrendered to Nazi forces. These events matter to me. They matter to the United States government.They matter to everyday Americans and Belgians.

This year is especially poignant, as we mark 75 years since the June 1944 Normandy invasion, September’s Market Garden airborne offensive, and, in December, the courageous stand made by American soldiers to turn back Hitler’s last offensive. Our modern day relationship with Belgium was built on the individual sacrifices of the soldiers who lie at Ardennes. As we work with Belgium to defend Europe’s eastern borders, or counter cyber threats that jeopardize peaceful democratic norms, the sacrifices of the soldiers around us remain the beating heart of today’s transatlantic alliance.

There are countless tales of heroism among these graves. One of these heroes was First Lieutenant Craig Edward Lewis. He was the bombardier of a B-26 nicknamed “Bank Nite Betty.” Born in Omaha, Nebraska, Lewis grew up in my native Chicago. He graduated from the University of Illinois in 1940 with a degree in communications.

In December 1944, Lewis supported Allied efforts to cut off German supply lines as part of the “Bridge Busters” of the 397th Bomber Group. For days, the group was unable to fly because of the same crushing snowfall and thick cloud cover that wreaked havoc on soldiers fighting in the forests around Bastogne. On the morning of December 23rd, there was a break in the weather and Lewis joined his crew on a mission to take out a railroad bridge in Germany. Over Malmedy, the bomber group came under intense anti-aircraft fire. Bank Nite Betty took a direct hit from German gunners, causing her to break in half instantaneously, and killing all seven crew
members.

December 23rd would be the worst single-day loss for the 397th Bomber Group. Ten aircraft were downed, 45 men were killed, 21 became prisoners of war, and still more were missing in action. For successfully carrying out the raid and destroying the rail line, the bomber group received the Distinguished Unit Citation for extraordinary heroism in action against an armed enemy. Lewis left behind his wife and his parents.

The story of First Lieutenant Lewis provides a sobering glimpse into the nearly 6,000 war dead and missing in action memorialized at Ardennes. Each marker you see here, each name etched throughout this cemetery, represents a remarkable life served in dedication to the cause of freedom.

Together with ceremonies at the Henri-Chapelle and Flanders Fields American Cemeteries and Memorials, we share this weekend of remembrance with 151 U.S. national cemeteries around the world. On Memorial Day, friends, families, and volunteers visit these cemeteries to place flags and keep the memory of our fallen heroes alive. From America’s Revolutionary War through today’s battlefields, as the President stated in his May 25, 2018 Memorial Day proclamation: “We remain duty-bound to honor those who made the ultimate sacrifice on our behalf and to remember them with thankfulness and unwavering pride.”

Since the end of World War II, we’ve worked together to counter the greatest threats facing each successive generation of Americans and Belgians. The Marshall Plan infused the modern equivalent of $100 billion, with no strings attached, into Western European economies to ensure that the people of this region could rebound from the violence and destruction. Belgium would later become an original founding member of the North Atlantic Treaty Organization. Belgian troops would fight alongside American and other soldiers on the Korean Peninsula. Our shared investment in defense capabilities halted and ultimately reversed the spread of Soviet communism, protecting democracies in Europe and around the world and helped create the conditions necessary for the emergence of the European Union and other multilateral institutions that would preserve the peace and promote prosperity.

Peace is only at risk when individual citizens lose sight of the intrinsic link between freedom and duty. Our brave soldiers interred at Ardennes understood that connection, and paid the ultimate price for it. For them, we renew our commitment to remain duty-bound, and work towards a Europe and a United States that remains free and at peace for decades to come.