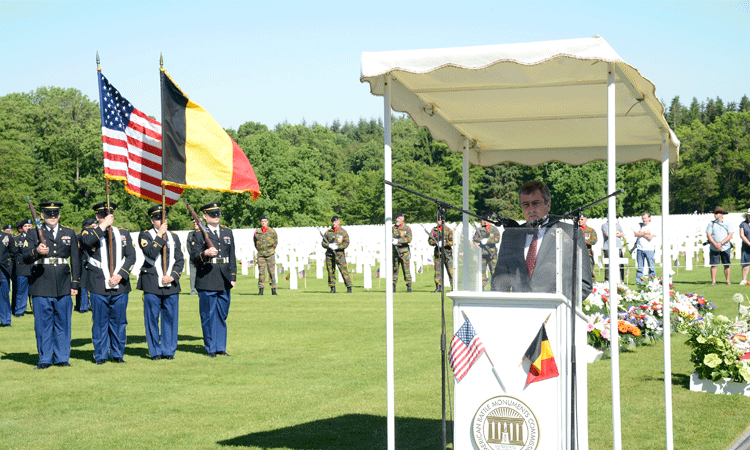 Memorial Day means many things to Americans. Some think of it as the transition into summer, but for most of us, it is a special moment. It is a time to remember those who came before us. It is a time for us to reflect on the past so that we can better understand our present and safeguard our future.

This is my first Memorial Day in Belgium. I am deeply moved to see all of you here today to commemorate our fallen heroes in this sacred place.

I am incredibly impressed by the expressions of gratitude and the genuine warmth and affection that the people of Belgium still hold have for all those who made the ultimate sacrifice in both world wars. We Americans are in turn equally grateful to all of you who keep these memories alive for future generations.

On April 6 the US embassy organized a special ceremony marking the centenary of the US entry into World War One, the first, truly global conflict that engulfed the lives of millions of soldiers and citizens from great empires to small nations. The legacy of that conflict led to years of instability and political conflict that ultimately led to World War II and an even greater path of destruction from Europe to Asia.

Belgium and the United States of America have a shared history of tragedy and loss but also of unity and an unbreakable belief that we are fully committed to do whatever it takes to defend our freedom and democracy. That was true throughout the 20th century and is equally true today.

Belgian military forces join American and others in helping secure NATO’s eastern flank; in providing training, advice and assistance to Afghan security forces; and in the Coalition to defeat the Islamic State and put an end to international terrorism. The Belgian military and defense establishment has proven itself a valued and critical partner to advance peace and security.

The crosses and stars of David that surround us today are an eternal reminder of the high price of freedom, and we are gathered here today to pay tribute to those American service members who made the ultimate sacrifice. We would not be here today if they had not answered the call to serve.

In places far from American soil, men and women, representing every race, religion and creed of the diverse American nation have defended our country and the principles for which we stand. They all knew the risk, and stepped forward, knowing that many of them would not come back home.

We owe them all a tremendous debt of gratitude.

In closing, I would like to quote the famous Supreme Court Justice and American Civil War veteran Oliver Wendell Holmes Jr who said the following about Memorial Day in 1885:

“But grief is not the end of all… I see beyond the forest the moving banners of a hidden column. Our dead brothers still live for us, and bid us think of life, not death – of life to which in their youth they lent the passion and joy of the spring. As I listen, the great chorus of life and joy begins again, and amid the awful orchestra of seen and unseen powers and destinies of good and evil our trumpets sound once more a note of daring, hope, and will.”

Thank you for being here today.