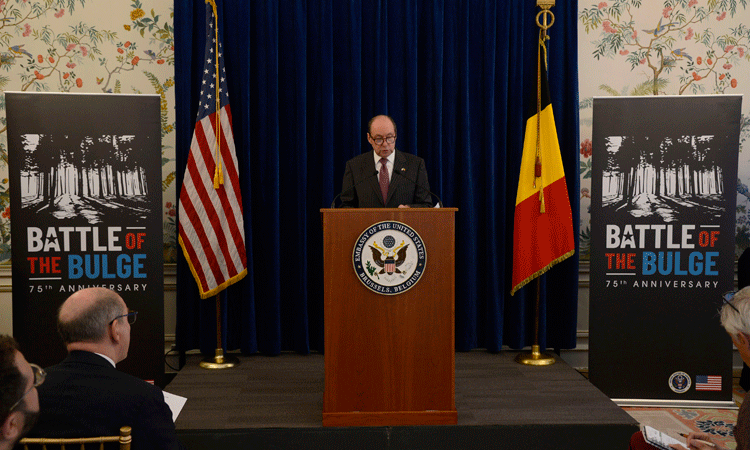 October 1, 2019 – To mark the 75th anniversary of the Battle of the Bulge, the sacrifices of American armed forces during World War II, and the generosity of the Belgian people, the U.S. Embassy to the Kingdom of Belgium announced the launch of a project to restore the Mardasson Memorial in Bastogne, Belgium.

U.S. Ambassador to the Kingdom of Belgium Ronald Gidwitz was joined by Minister of Justice Koen Geens, Bastogne Mayor Benoit Lutgen, and John Wessels of the American Battle Monuments Commission to announce the project.

The Mardasson Memorial was built to honor the sacrifices of American soldiers killed and wounded during the German Army’s surprise Ardennes Offensive in December 1944 -January 1945. It is the only memorial that commemorates all American forces who fought in the Battle of the Bulge. Private Belgian citizens donated funds for its construction, which was inaugurated in 1950 in the presence of General Anthony McAuliffe, commander of the 101st Airborne Division during the defense of Bastogne.

“In my time as U.S. Ambassador, I have attended many commemorations throughout the country, and one thing always stands out. Belgium never forgets. The people of this country work tirelessly to keep the memory alive of those who fought and died for their freedom,” said Ambassador Gidwitz. “This is our way of expressing our gratitude to the people of Belgium for their decades of unwavering support and commitment to honoring our soldiers.”

The U.S. Embassy is working with several partners on the project, including the Ministry of Justice and Building Agency and the City of Bastogne. The American Overseas Memorial Day Association created the Bastogne Memorial Fund to conduct fundraising in the United States. The American Battle Monuments Commission is managing the renovation project.

Koen Geens, Minister of Justice and Building Agency: “The commemoration of the Second World War and the honoring of victims who sacrificed their lives for the liberation of Belgium is close to your and my heart. I am grateful to the American government for investing in the renovation and restoration of the magnificent Mardasson Memorial on the 75th anniversary of the Battle of the Bulge. It is important to preserve this monument and to keep the memory of the war victims alive.”

The first phase of the project includes extensive cleaning of the monument and crypt, as well as minor restoration of pavement stones. Phase I is scheduled for completion ahead of commemorative events set for December. Fundraising for a second phase and a more thorough restoration is already underway. The Bastogne Memorial Fund has collected more than 525,000 euros to date.

The Battle of the Bulge was the largest and bloodiest single engagement fought by American forces during World War II. The United States suffered nearly 90,000 casualties while 2,500 Belgian civilians lost their lives.