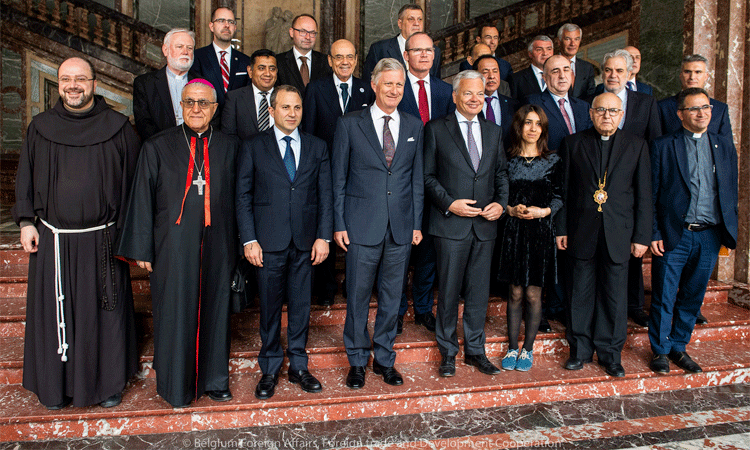 Brussels Conference on Victims of Ethnic and Religious Violence in the Middle East: Protecting and Promoting Plurality and Diversity

On behalf of the United States Government, I want to thank Belgium for hosting this important and timely meeting and Lebanon for co-chairing it. We appreciate that Belgium has continued this series of meetings, launched by France in 2015, and hosted by the United States in 2016 and Spain last year.

We are here out of a shared concern about the future of religious diversity and pluralism in Iraq and Syria. We stand united in our condemnation of the atrocities ISIS has committed against all of the innocent people in these countries, including religious and ethnic minorities. We are resolved to help these vulnerable communities heal after the trauma they have suffered, to do what we can to reknit the social fabric that once held them together, and to hold accountable those who committed atrocities against them.

We stand together in insisting that religious freedom and other human rights of all must be respected. And we are meeting today to find ways to do more at this crucial moment, to work to ensure Iraq and Syria’s diverse mosaic of religious and ethnic communities is not lost to history, to see that these people, both men and women, are protected equally under the law and have a hand in determining the future of their communities.

The United States’ commitment to assisting the victims of ISIS atrocities and promoting religious diversity and pluralism is evidenced by the President’s National Security Strategy, released in December 2017. It recognizes that religious minorities continue to be victims of targeted violence and states explicitly that the United States “will advocate on behalf of religious freedom and threatened minorities… We will place a priority on protecting members of these groups and will continue working with regional partners to protect minority communities from attacks and to preserve their cultural heritage.”

This is too big a task for any country to face alone. We must work together to help these communities in whatever ways we can, whether training members of police and security forces that are from minority populations so that they can be incorporated into legitimate security structures in their communities; exhuming mass graves and supporting other efforts to gather and preserve evidence that may be used in the future to hold ISIS accountable and provide information to families about the fate of their loved ones; rehabilitating and protecting cultural heritage sites; or helping to provide needed psychosocial assistance to the women and children who survived the horrors of ISIS captivity.

With Iraq fully liberated, the international community must help the Government of Iraq shift from the hard work of winning the war to the equally difficult task  of winning and maintaining the peace. The Paris Action Plan rightly emphasizes several key issues, such as ensuring protection to affected populations and increasing security, supporting sustainable return and reintegration of displaced populations, fighting impunity and working to ensure justice, promoting inclusiveness and plurality in political processes, and preserving cultural heritage. In all of these issues we see the importance of protecting human rights, including religious freedom, and helping to secure equal protection under the law for all.

The United States has provided $1.7 billion in humanitarian assistance for the Iraq crisis since 2014. In one recent disbursement, we provided $10 million in additional humanitarian funding for food, shelter, and healthcare for internally displaced people in and around Ninewa. The United States has also committed $265 million for post-liberation stabilization efforts through the Government of Iraq-led, Global Coalition to Defeat ISIS-funded, UNDP Funding Facility for Stabilization. In our latest tranche of funding, we directed $55 million specifically to benefit communities in the Ninewa Plain and western Ninewa. UNDP reports it has supported more than 450 activities in these areas, including critical infrastructure projects to improve these communities’ access to electricity and water. UNDP, however, faces critical funding shortfalls and requires an additional $560 million in order to cement hard-fought military gains with stabilization programming.

The United States has contributed $112 million over the past three years to clear explosive remnants of war in Iraq. This engagement has resulted in the clearance of thousands of explosive hazards from minority communities in the Ninewa Plain and western Ninewa and facilitated safe access to critical infrastructure associated with the delivery of clean water, power, healthcare, and education as well as to houses of worship that were damaged or booby-trapped by ISIS.

We are fulfilling Vice President Pence’s promise in October 2017 to fund new initiatives with outside parties – including faith-based organizations – to assist persecuted ethnic and religious minorities in Iraq. The United States recently hosted a two-day workshop in Baghdad with 33 diverse organizations, uniting partners to produce innovative project proposals to assist in the voluntary return of displaced Iraqis to the Ninewa Plain and western Ninewa. We will award up to $35 million of direct USAID funding to these activities in the coming months. Some of your embassies were able to join the conference and we hope your governments will fund or co-host additional projects that were the fruit of that labor.

Since 2012, the United States has provided nearly $7.7 billion in humanitarian assistance to those affected by the Syria crisis, both in Syria and in neighboring countries. We support myriad efforts to document human rights abuses and violations, including through the Commission of Inquiry and the International, Impartial, and Independent Mechanism (III-M) on the most serious crimes under international law committed in the Syrian Arab Republic. We also support efforts to hold all those responsible accountable, protect cultural heritage sites, stabilize areas liberated from ISIS in Coalition-backed military operations, promote inclusive institutions, and ensure people of all faiths can live safely in Syria.

The Assad government and its supporters continue to use indiscriminate and deadly force against civilians of all faiths and conduct air and ground-based military assaults on cities, residential areas, and civilian infrastructure with dire consequences. We are also concerned about Assad stoking religious tensions between groups who have lived side-by- side for generations as a means to justify attacks. The United States is very concerned about the escalation of violence throughout Syria, including in the northwest, where civilians experience regular bombings by the Assad government. We are also deeply disturbed by reports of alleged forced conversions of Yezidis and destruction of their places of worship by armed actors in Afrin.

The question before all of us today is what can we do as a community of values – a community that respects diversity of thought and belief – to help recreate conditions that give minorities confidence in a future in their ancestral homelands. Time is working against us. This is the fifth meeting on this topic since 2015. If we are to ensure the rich tapestry of religious and ethnic communities is restored, real action is needed now. During my multiple visits to Iraq, I have seen the vibrancy in what is left of these minority communities, but also that they live a precarious and fragile existence. If we do not take robust steps in the coming months so minorities can provide for their own security and their towns and villages receive assistance, the exodus will likely continue.

April 2017 witnessed the first celebration in northern Iraq of two important holidays since ISIS was pushed out of Iraq: the Yezidi people celebrated their NewYear and Christians celebrated Easter. The stories were heartwarming and encouraging. Yet the crisis is not over for them. The crisis is not over so long as people are enslaved and traumatized, there is no justice for victims, and people cannot return home.

The crisis is not over for the Yezidis as long as thousands of Yezidi women and children remain kidnapped and enslaved. I have met with the Baba Sheikh (the Yezidi spiritual leader), survivors, and family members who are still looking for loved ones. When I attended ceremonies in Lalish to mark the second anniversary of the ISIS attack on Sinjar, I met a Yezidi who gave me pages of names of missing loved ones. Their struggle with ISIS will not be complete until their loved ones are accounted for. We are committed to working to find them and see them returned to their families.

The crisis is not over for minorities if ISIS members are not held accountable. As one Yezidi activist told me earlier this year, a trial is far better than a bullet when it comes to defeating the ISIS mindset. However, justice means more than perpetrators being tried for terrorism as a crime against the Iraqi state. It means where possible convicting ISIS members for their crimes against the Iraqi people – torture, kidnapping, rape, enslavement, and murder. It also means committing to community justice and reconciliation. We all must recommit ourselves to see justice and accountability for the crimes ISIS committed against Yezidis, as well as Christians, Muslims, and other minorities, and against the broader population of Iraq. We were proud to support UN Security Council Resolution 2379, which requested the Secretary-General to create an international investigative team to
collect, preserve, and store evidence of ISIS atrocities in Iraq for eventual prosecution. We hope other nations will also support this effort.

And the crisis is not over if people cannot go home. For displaced civilians, including many Christians, Yezidis, and other minorities, the simple act of
returning home has yet to take place because of security concerns, including homes and fields that still need demining, and at times local political considerations.

Consequently, we in the international community must insist the Government of Iraq and Kurdistan Regional authorities put conditions in place so that minorities can voluntarily return home and live in safety, dignity, security, and peace with their neighbors in an Iraq committed to protect and promote its religious and ethnic diversity, and treat their minorities as equals.

From these discussions today, let’s work to develop a plan towards greater  respect for human rights and equality, specifically with respect to religious freedom and interfaith tolerance. The best way to defeat ISIS and its ideology of hateful violence is by protecting what they tried to exterminate – religious and ethnic pluralism. Thank you.