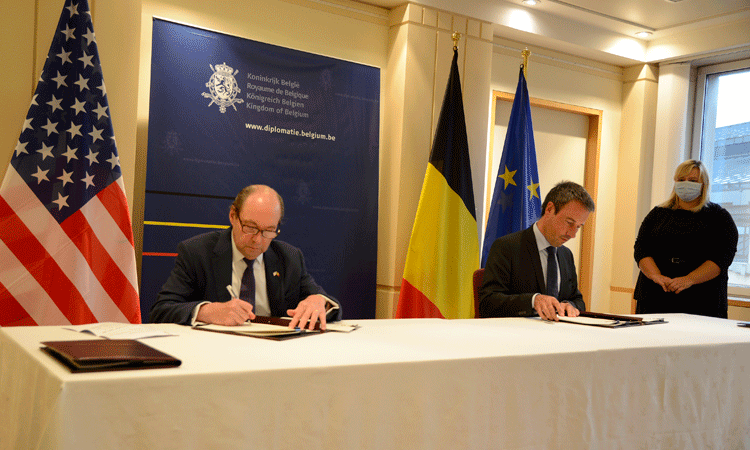 BRUSSELS, Belgium –Belgian Minister of Foreign Affairs and Defense Philippe Goffin and United States Ambassador to the Kingdom of Belgium Ronald Gidwitz signed a “preclearance” agreement on Monday that will allow passengers boarding flights from Brussels Airport to the United States to clear U.S. customs and immigration prior to embarkation in Brussels, and to save time upon arrival. This agreement, which has been under discussion for several years, will help further strengthen the already substantial trade and investment between the two countries and promote Brussels Airport as a trans-Atlantic hub.

With preclearance, U.S. Customs and Border Protection (CBP) officers in Brussels will conduct the same immigration, customs, and agriculture inspections of international air travelers currently performed upon arrival in the United States. Under preclearance, travelers arriving in the United States on flights from Brussels will be able to bypass CBP and Transportation Security Administration (TSA) inspections and proceed directly to their connecting flight or destination.

Before the agreement signed today can become operational, it must be ratified by the Belgian Parliament, and further technical agreements remain to be concluded with the Brussels Airport Company to facilitate these operations.

Belgian Foreign Minister Goffin praised the agreement, which exemplifies the high level of trust between the United States and Belgium – two long-standing transatlantic allies – and which will allow for more efficient traveling between our countries, enhancing tourism and business exchanges even further.

U.S. Ambassador Gidwitz framed this as an historic deal that will enable Brussels Airport to bolster its position as a leading commercial hub in Europe and serve as an important pillar in the post-COVID recovery for the aviation and tourism sectors.

Once the program is operational, Brussels will be the first location for U.S. preclearance operations in mainland Europe.