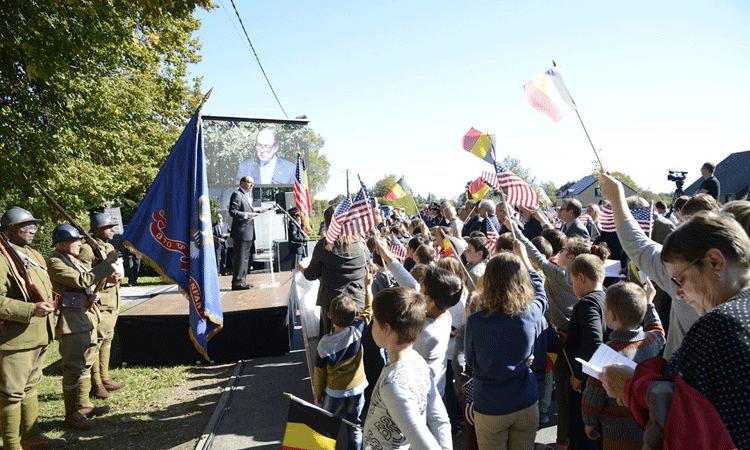 Since my arrival as U.S. Ambassador to the Kingdom of Belgium, I have attended a number of commemoration ceremonies to honor Americans who made the ultimate sacrifice on Belgian soil.  I have visited the final resting places for thousands of American soldiers in our three U.S. cemeteries, who fought bravely to ensure that even 100 years later, the West remains democratic, free, and at peace. Belgium is one of very few countries that shares with the United States this common history of sacrifice that binds us together through to today.

It is with great pride that I have the honor to join all of you by this roadside in Petite-Chapelle today.  We are here to commemorate the bravery and sacrifice of the men of the 370th U.S. Infantry Regiment who, 100 years ago this year, were fighting alongside the French 10th Army, in part because their own country and its military were segregated.  In the closing days of the war, they crossed the border where we marched today to drive German forces from this area.  They helped secure the peace on what we now know as Armistice Day.

I emphasize the circumstances of these brave soldiers because they answered their nation’s call and came to the defense of liberty and freedom even though it was not widely available to them in their home communities.  Their fight would bring peace to European battlefields and advance their progress toward equality at home.  It demonstrates that, even though we still face challenges with integration and acceptance in our communities in the United States and Belgium today, there is a way to work toward a common good.  There is a way to join in a greater cause that ensures our collective safety and promotes our shared prosperity.

Though the world has since experienced even greater violent conflicts, the United States and Belgium have repeatedly answered the call to defend liberty and to invest in our partnership and the institutions that promote peace in Europe and around the globe.  One hundred years later, we stand at a peaceful crossroads in Petite-Chapelle to remind ourselves that freedom has a price.  From the Western Front 100 years ago to NATO’s eastern flank today, we have and we must continue to pay that price.

For the past year, the U.S. Embassy has organized a series of events to highlight the lesser known aspects of life in the United States and our involvement in World War I.  For example, we have hosted professors who gave us greater insight into the role of immigrants and minorities in the war effort.  We also brought the next generation to the table through a virtual exchange program between primary school students in Nebraska and Heuvelland in Flanders where American forces first entered the war in Belgium.  Some of those Belgian students are with us here today.

Going forward, the primary school students from this frontier border region will join a virtual exchange program with American students in Chicago.  This is significant for two reasons.  First, most of the soldiers of the 370th Infantry Regiment came from Chicago and were originally part of a unit of the Illinois National Guard.  This fact alone makes me even more proud to be here on their behalf today as a fellow native of Chicago myself.  These men were led into battle by the highest-ranking black officer in the American Expeditionary Forces and would return home highly decorated for their valor.  Second, these students represent the next generation of Belgian and American leaders who will bear the torch of remembrance.  Just as many of us here today were not previously aware of the 370th’s liberation of Petite-Chapelle, many Americans also do not know the stories of heroism and sacrifice from the war.  The program participants will be an essential part of carrying forward the lessons of 100 years ago into the decades to come.

On behalf of the government and the people of the United States, thank you very much for your attendance at this special occasion for our great nations.

Thank you to Mayor Douniaux and the commune of Couvin for your partnership in shining a spotlight on this noteworthy piece of our shared history.