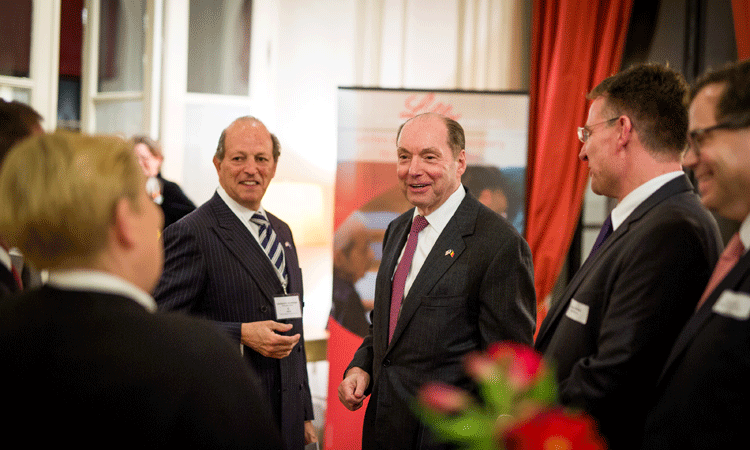 Let me begin by thanking AECA for the invitation and for your important work in strengthening Trans-Atlantic understanding.

While I’m a “new-ish” Ambassador to Belgium, I consider this country an old friend. I’ve been visiting Belgium for both business and pleasure since the 1960s.
Now, to be here as Ambassador and serve my country, is a real privilege and honor. I often feel like Cinderella at the ball.

The theme of this evening, “The European Union and the United States – Privileged Partners in a Complex World” comes at a critical time, as we face a new era of great-power competition, which brings new opportunities and challenges for the West. Europe is the central pillar of the United States’ international alliance system and is by far our largest economic relationship, with more than $5.5 trillion in annual commerce. In order to preserve our partnership in this complex world, we have to recognize common threats and work together to find ways to counter them. We can do this through frank and open dialogue among friends and partners. We may not always agree on every issue, but it’s important to remember the success, prosperity and security of the United States and Europe is anchored in a history of strong cooperation across the Atlantic.

One element of this history is our heritage of shared sacrifice in times of war. We have just concluded the centenary of the end of World War I, and are on the eve of the 75th anniversary of the most pivotal moments of the Second World War. I’ve visited all three of our cemeteries that serve as the final resting place for more than 13,000 American soldiers from the wars of the last century. I highly recommend visiting the American cemeteries at Flanders, Ardennes and Henri Chapelle – they are compelling reminders of the bond that unites Belgians and Americans. The team at the U.S. Embassy to the Kingdom of Belgium – along with our Belgian partners in government, business, civil society and more – build on this shared history every day.

Bilateral trade and investment remains a crucial pillar of our partnership: In 2017, total trade between our two countries stood at around 55 billion dollars. Belgium is the U.S.’s 12th-largest trading partner. Some of you represent the largest American companies with offices and production centers in Belgium, and I look forward to promoting their contributions to the U.S. and Belgian economies. There are many exemplars of the U.S.-Europe trade relationship here in Belgium – Johnson and Johnson, in Belgium since 1960, and currently employing 4,600 people; Dow Chemical Company, which started operations in 1970 and employs 650 people, to name just two.

U.S. companies are important job creators in Belgium: the 900 majority-owned U.S. groups active here directly employed more than 126,000 people last year. The top 50 U.S. companies in Belgium alone employ around 80,000 people, which highlights the importance of large multinational companies as a source of direct jobs – to say nothing of the business ecosystems they create.

Likewise, total Belgian investment in the U.S. has increased more than 50 percent over the last few years according to the U.S. Department of Commerce, from $28 billion in 2011 to over $45 billion today. In terms of jobs, that makes Belgian firms the 10th-largest foreign employer in the United States, supporting about 160,000 American jobs. A few months ago, I visited the Belgian bus manufacturer, Van Hool, which announced it will open its first U.S. manufacturing plant in Tennessee, resulting in 600 jobs for American workers with $47 million worth of investments.

Our trade and military relationship will continue to grow, thanks to Belgium’s recent decision to replace their F-16 fleet with the fifth-generation F-35 aircraft. The decision speaks not only to our decades-long cooperation in air defense with Belgium, but also to our partnership with our European and NATO Allies. Belgium will be flying the state-of-the-art F-35 alongside many of its closest European partners. Those who have followed this issue closely over the past few months probably noticed a common narrative that somehow, choosing the F-35 disadvantaged Belgium’s defense relationship with the rest of Europe. Nothing could be further from the truth. Belgium retains its close land forces relationship with France and its naval partnership with the Netherlands. And in a few years, Belgian pilots will be flying the F-35 next to other European F-35 pilots – from the United Kingdom, Norway, Italy, and the Netherlands. I’m confident more European countries will also choose the F-35, expanding its role as the most advanced and interoperable plane in the world. I see no contradiction in Europe’s quest for greater integration and cooperation in defense and other areas, and a dynamic, growing and close relationship with the United States.
Security
Our continued common prosperity is also dependent on our joint security. Deterring potential security threats to Europe continues to be a priority for the United States, and our solemn pledge to you as a NATO ally. Belgium is an active participant in NATO and coalition operations in Afghanistan, the Baltics and in the Defeat-ISIS campaign. We also welcome Belgium’s upcoming seat on the UN Security Council. We look forward to working together on shared priorities.

The enduring U.S.-Belgium partnership is based not only on business and trade, military cooperation, and political collaboration. It’s about two countries linked by shared values, sacrifices and challenges. It’s based on investing in one another in all fields, which further binds our futures together. As we face today’s myriad global challenges — whether we are in boardroom negotiations, R&D centers or in the Baltic air space – our partnership is enduring and essential to the future of our two countries.
Thank you.