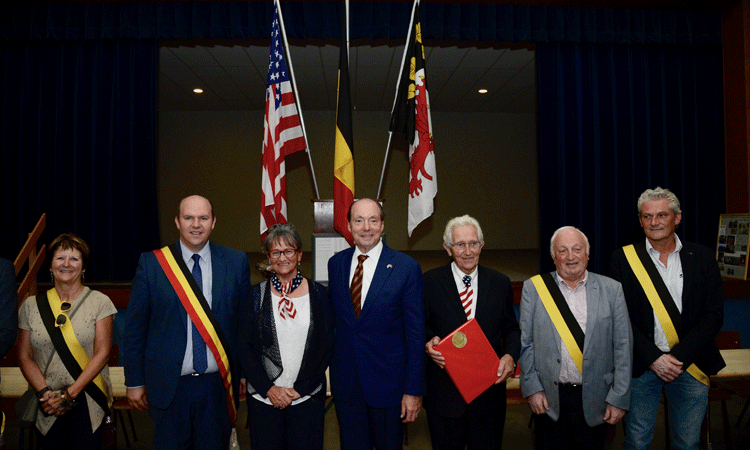 Ambassador Ronald J. Gidwitz’s Remarks at the 75th Anniversary Commemoration of the Crash of the “Picklepuss”

Ambassador Ronald J. Gidwitz’s Remarks at the 75th Anniversary Commemoration of the Crash of the “Picklepuss”

It is an honor to be with you here today. On my way to Plombieres, I visited the cemeteries of Ardennes and Henri-Chapelle to pay my respects to the thousands of American service members buried there.

Visiting these cemeteries is a tremendously humbling experience and reminds us all of the price of freedom and depth of our ties between the United States and the Kingdom of Belgium. We owe those who fought and died for our freedom a tremendous debt of gratitude. It is a debt that we can never repay, but we can honor their legacy. We can continue to dedicate ourselves to securing the peace has led to nearly 75 years of safety and peace and for the generations to come.
Belgium and the United States share an unbreakable commitment to do whatever it takes to defend both our nation’s freedom and democracy. That was as true in the beginning of the 20th century, and it is equally true in 2018.

In my short time here, I have been deeply moved by everything that the people of Belgium have done to commemorate all those who died liberating Belgium and Europe during the two bloodiest conflicts in our history.

Everyone here today — from the youngest children in the audience to our honored veterans and active duty service members — help keep that memory alive.

We are gathered here this evening, thanks to the efforts of two great Belgian friends of America, Marcel and Mathilde Schmetz.

On August 17, 1943, Marcel watched in horror as he saw an American B-17 Flying Fortress catch fire in the skies over his family’s farm. He would later learn that this was the “Picklepuss” flown by Captain Robert Knox. The plane shared this nickname with the Captain’s wife Dorothy. Only four of the crew survived. Captain Knox was among those killed in action that day. I paid my respects at his final resting place in Henri-Chapelle during my visit.

The tragic events of that day inspired a lifetime of remembrance in Marcel, and later Mathilde, who have dedicated a great deal of time and effort to make sure that none of those American service members are forgotten. Their Remember Museum is well known across the United States and was featured on television just last week. I look forward to visiting it soon.

Marcel and Mathilde, you say that you can never do enough to honor the fallen and you certainly prove that, day in, day out, rain or shine. But what you have done is extraordinary. On behalf of the United States and its people, I am truly grateful to both of you. Thank you.

Mayor Wimmer, thank you for hosting us this evening.

To all our veterans and active duty service members thank you for your service.