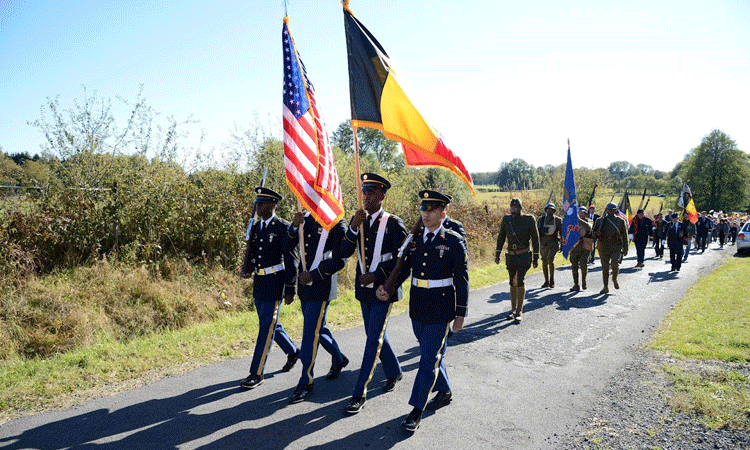 Commemoration of the liberation of Petite-Chapelle by African-American soldiers in 1918.

“It is with great pride that I have the honor to join all of you by this roadside in Petite-Chapelle today.  We are here to commemorate the bravery and sacrifice of the men of the 370th U.S. Infantry Regiment who, 100 years ago this year, were fighting alongside the French 10th Army, in part because their own country and its military were segregated.  In the closing days of the war, they crossed the border where we marched today to drive German forces from this area.  They helped secure the peace on what we now know as Armistice Day.

I emphasize the circumstances of these brave soldiers because they answered their nation’s call and came to the defense of liberty and freedom even though it was not widely available to them in their home communities.  Their fight would bring peace to European battlefields and advance their progress toward equality at home.  It demonstrates that, even though we still face challenges with integration and acceptance in our communities in the United States and Belgium today, there is a way to work toward a common good.  There is a way to join in a greater cause that ensures our collective safety and promotes our shared prosperity.” – Ambassador Gidwitz’s Remarks at the 370th Infantry Regiment Commemoration Event, Petite Chapelle, Couvin, October 4, 2018. [Full remarks]

Ambassador Gidwitz joined, Ebony Doughboys (a group of American WWI re-enactors), local officials and residents of the Commune of Couvin, and mayors from French border towns to celebrate the liberation of Petite Chapelle by African-American soldiers fighting with the French 10th Army during World War I.  The event started with a symbolic march from the Belgian-French border featuring schoolchildren from the Belgian border schools and from Heuvelland in Flanders.  This ceremony shed light on a forgotten chapter in U.S.-Belgian history and included the unveiling of a memorial in honor of the American regiment, the first permanent marker honoring the role of African-American soldiers in the war effort.  Beyond the event, the schoolchildren of the Belgian border schools will participate in a virtual exchange program with American schoolchildren in Chicago, which is significant because the 370th Infantry Regiment was formed from the Illinois National Guard and many of its soldiers came from the Chicago area.  The memorial will now become part of annual Armistice Day commemoration events along with a memorial to Fernand Jacquet, a renowned Belgian WWI pilot who was born in Petite Chapelle.

For the past year, the U.S. Embassy has organized a series of events to highlight the lesser known aspects of life in the United States and our involvement in World War I, such as hosting visiting experts who provided greater insight into the role of immigrants and minorities in the war effort.  We also facilitated a virtual exchange program between primary school students in Nebraska and Heuvelland in Flanders where American forces first entered the war in Belgium.  Continue to follow us here for more information about engaging programs we operate with Belgian partners from across the country.